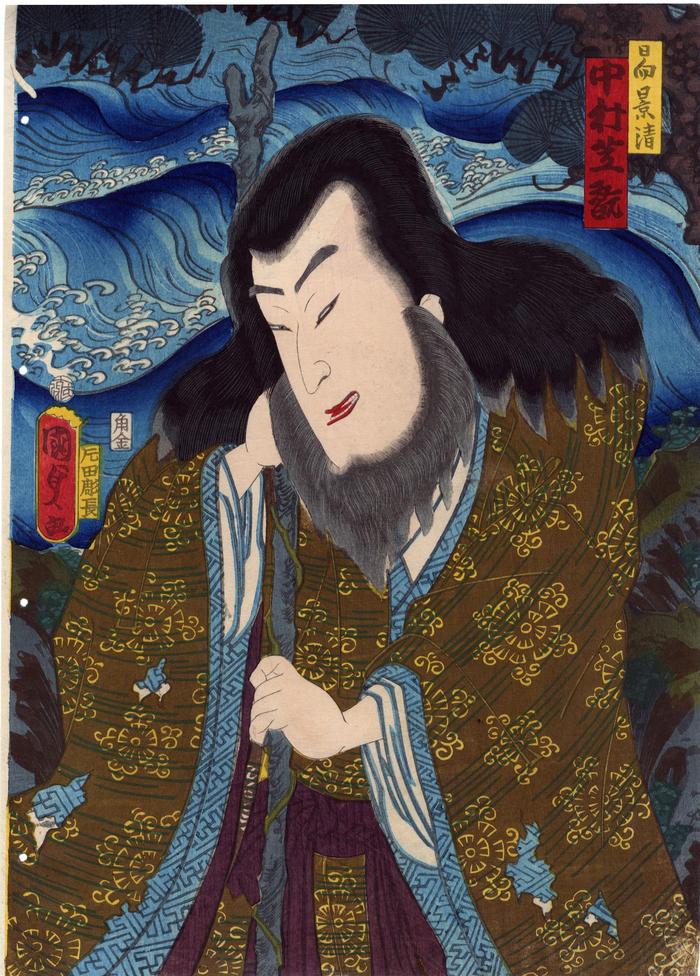 Kagekiyo, who was often referred to as 'The Blind Man of Hyūga', is important enough to have been represented in literature, art, nō, jōruri, kabuki and even early cinema.

In the description of a different print Henk J. Herwig in The Hundred Poets Compared (p. 228) wrote: "After the sea battle of Dan-no-Ura, where the Minamoto defeat the ruling Taira clan, the Taira general Akushichibyōe Kagekiyo is captured and banished to Hyūga on Kyūshū Island. Here he is considered an outcast and has to earn his living as a beggar. Back in the capital, his daughter Hitomaru has sold herself to a brothel to earn money so that she can purchase her father a position in the newly installed government. When Hitoraru [sic] has saved enough money, the brothel owner gives her permission to travel to Hyūga under the escort of the middleman Sajitayū. When Hitomaru finally meets up with her father, she asks him to admit his defeat and accept his former enemy, Yoritomo, as the new ruler of the nation. Kagekiyo stubbornly refuses and flies into a rage, becoming even more upset when he is told that the money needed to restore his position comes from Hitomaru's husband, a wealthy farmer. He can't accept that his daughter has married below her status and tells Hiromaru that the man she is looking for has died of starvation and that she should leave. Shortly after Hitomaru has returned to the capital, a villager hands Kagekiyo the money and a letter that she has left behind. From the letter he learns that Hitomaru is not married at all but has sold herself to a brothel. Deeply moved by his daughter's sacrifice, he decideds to give in, and accepts the supremacy of the Minamoto clan."

In the print by Kuniyoshi, being described above, Herwig continues: "Kuniyoshi shows the meeting of father and daughter on the beach at Hyūga with clouds of smoke overhead caused by the burning of seaweed." The pine tree needles act as substitute for that smoke in this Kunisada II print in the Lyon Collection.

The left panel shows the actor Bandō Mitsugorō as Musume Hitomaru, the daughter of Kagekiyo.

There are five other prints in the Lyon Collection which deal with different aspects of the life of Kagekiyo.