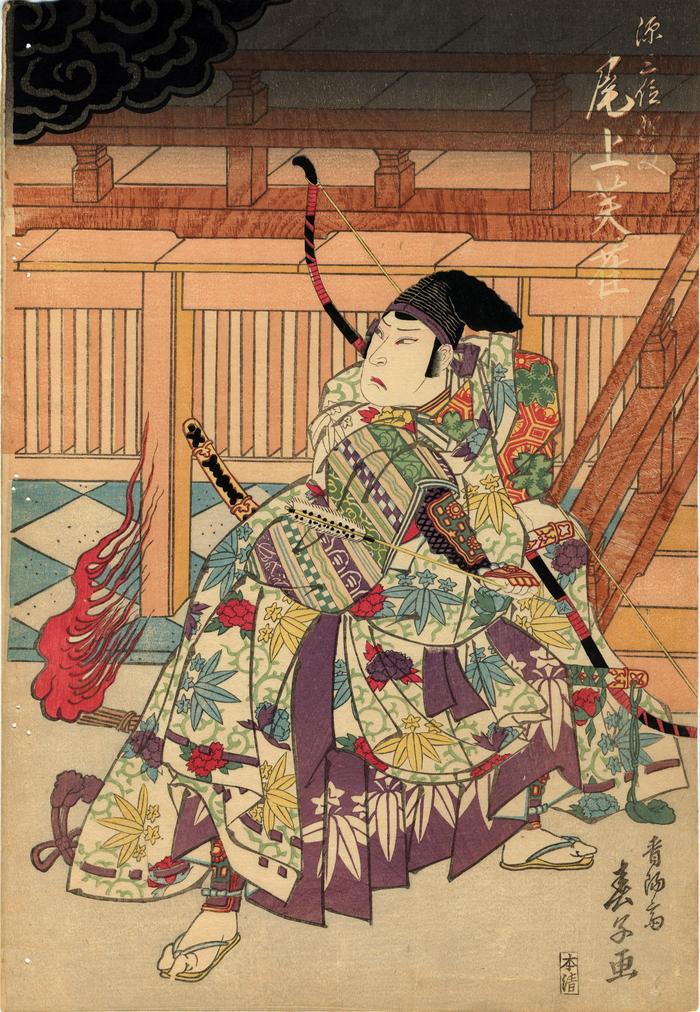 Minamoto no Yorimasa prepares to shoot the nue on the roof.

The nue (鵺) is Japanese chimera, a mythical creature with a monkey's head, tanuki's body, tiger's limbs, and a snake tail.

There are four other prints in the Lyon Collection which deal with the theme of Yorimasa's slaying of the nue: #200, a triptych by Kuniyoshi; #567 by Hokushū; #909 by Kuniyoshi; and #1170 by Ashiyuki.

The story of the slaying of the nue appears in Book 4, Section 15 - 'The Nightbird' - of The Tale of Heike. The emperor has been disturbed by nightmares and it was thought that these must have a physical manifestation. So, Yorimasa is called in to slay the monster which is causing these nightly disturbances. Below is the translation provided by Royall Tyler:

At the hour foreseen for His Majesty's torment, a black cloud moved, as those who knew said it would, from toward the grove at Tōsanjō, then settled over where the emperor lay. Yorimasa, glancing up sharply, saw iin it a strange shape. He knew he was finished if he missed.

Nonetheless he took an arrow,
fitted it carefully to the string,
called in the secret depths of his heart,
"Hail, Great Bodhisattva Hachiman!,"
drew to the full, and let fly.
He had a hit; his arm felt it.
"Got him!" He gave the archer's yell.
I no Hayata swiftly approached,
found where the thing had fallen,
and ran it through nine times with his sword
Everyone there brought up light
for a good look at whatever it was:
a monkey's head, a badger's body,
a snake's tail, the limbs of a tiger,
and a cry like that of a thrush.
"Frightening" is hardly the word.