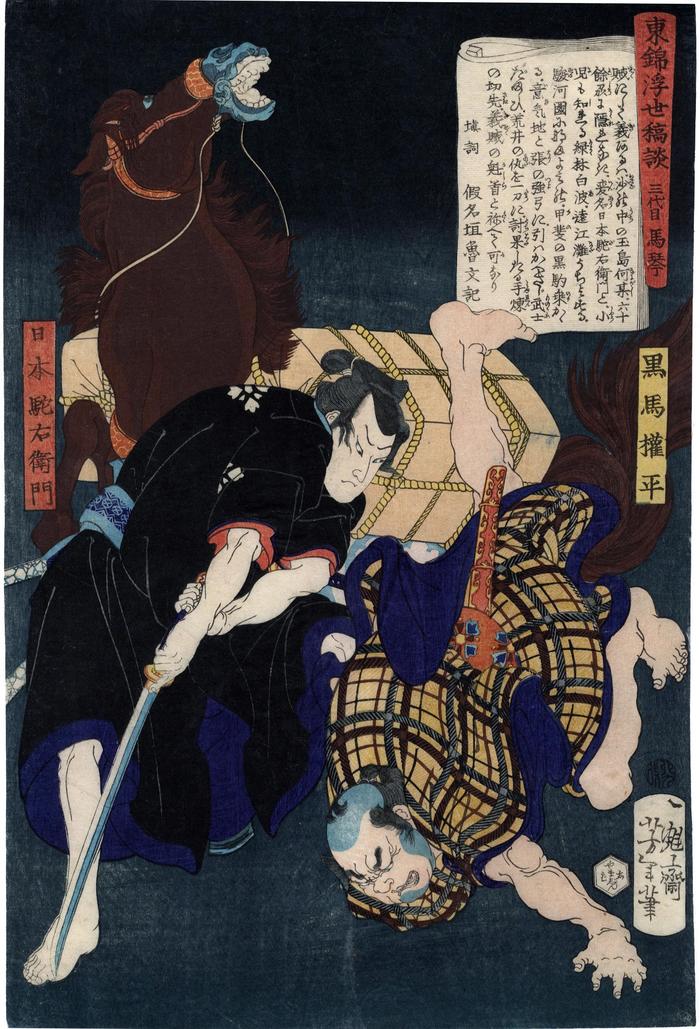 "Rough tales of the floating world told on eastern brocades (Azuma nishiki ukiyo kōdan) is a complex series in its content ad in the interpretation of the meaning of the series title. In the past, little effort has been made to further our understanding of the term kōdan (稿談) in the title which, when written with different homophonic characters, refers to the tradition of storytelling (講談). 'Storytelling' is a central element in the set, since the series title in each print is followed by the name of a well-known raconteur (kōdan-shi) from the late Edo and early Meiji periods. The character used for kō in the title kōdan connotes 'rough', 'sketchy' or 'rough version'.

Storytelling (kōshaku, or known more broadly in the Meiji as kōdan) was a form of popular entertainment. Seated before their audiences, raconteurs frequently told lengthy stories drawn from heroic episodes in history, or about ghosts and demons. Wooden clappers or a fan could be employed to add rhythm or heighten climatic moments. In most cases, the link between the storyteller and his imagery in this set is unclear.

The writer Kongaku Robun (1829-94) summarised the stories in the text contained in white booklet-shaped cartouches, to which Yoshitoshi added the corresponding imagery. A number of these tales were adapted for the Kabuki theatre or formed the basis for popular novels; the subjects of some are obscure to us today. Around the time of the production of these prints, storytelling was enjoying a resurgence and many urban neighbourhoods had storytelling theatres (yose). In 1854, some 382 theatres throughout the capital Edo (present-day Tokyo) boasted kōdan performances, a sharp increase from 125 in the late 1820s.

The set was issued from 9/1867-2/1868. Forty-five designs from this series are presently known... The set is unusual for its collaboration between seven different publishers. It is quite rare and was never re-published."

Quoted from: Yoshitoshi: Masterpieces from the Ed Fries Collection, p. 89.

There are five prints from this series in the Lyon Collection.
warrior prints (musha-e - 武者絵) (genre)
Yamashiroya Jinbei (山城屋甚兵衛) (publisher)