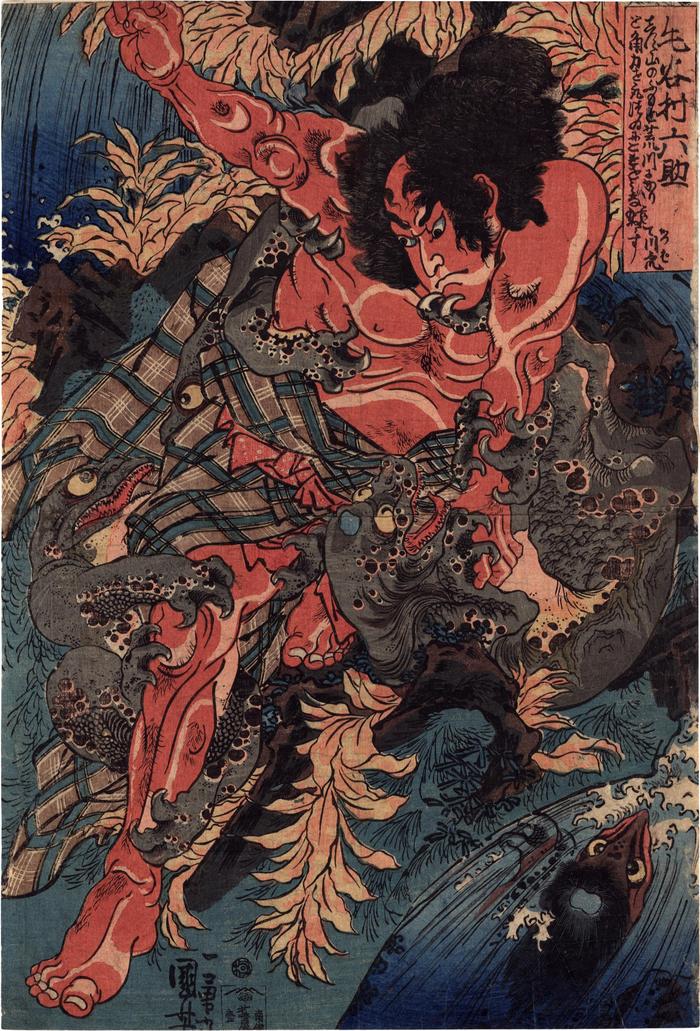 Keyamura Rokusuke (毛谷村六助) struggling with three kappa on a riverbank with another swimming in the river.

"Rokusuke came from the village of Keyamura situated at the foot of Mount Hikozan in Buzen province. He was a skilled fighter and a good son to his parents. Commander Katō Kiyomasa took him as one of his sixteen generals to Korea.

In Kōyōen Shūjin's kabuki drama Horrible Excusions Rokusuke was dramatically staged for the first time in 1791 in a wrestling match with the water sprites. One day, as the six-cubit-wide Rokusuke was on his way home with a bundle of rushes, he met a thumbling who measured just less than two cubits and challenged him to a wrestling match. The combative Rokusuke agreed. Yet the thumbling suddenly became just as big as he was and, what is more, as hard a s steel, and he was so smooth that it was impossible to get hold of him. Without hesitation, Rokusuke grabbed his opponent by the belt and threw him to the ground. The latter yelled and leapt into the river. Soon, thirty water sprites emerged and clung to Rokusuke. In his distress, he called out to the mountain god Hikozan for help, who raised a wind that dried up the water sprites.

Quoted from Samurai Stars of the Stage and Beautiful Women: Kunisada and Kuniyoshi, Masters of the Color Woodblock Print by Hatje Cantz, Museum Kunstpalast, p. 195. It is illustrated here in color.

Keyamura Rokusuke struggling with three kappa on a riverbank with another swimming in the river. Kappa are amphibious goblins with the body of a turtle, the limbs of a frog and the head of a monkey.

This example is an early state (later states omit the black censor seal and add a white seal in the background near the heel).

Keyamura Rokusuke (毛谷村 六助?, died 1593) was a retainer of the Japanese clan of Toyotomi following the Azuchi-Momoyama period 16th century Japan. The first vocation of Rokusuke was farming. His talents were soon discovered by Kato Kiyomasa, and Kato hired him as a scout. He changed his name from Kida-Magobe (木田孫兵衛) to Keyamura Rokusuke when he became a samurai. [This information was taken directly from Wikipedia.]

Illustrated in a small black and white reproduction in Kuniyoshi: The Warrior Prints by B. W. Robinson, Cornell University Press, Ithaca, 1982, p. 101. S1e.4.