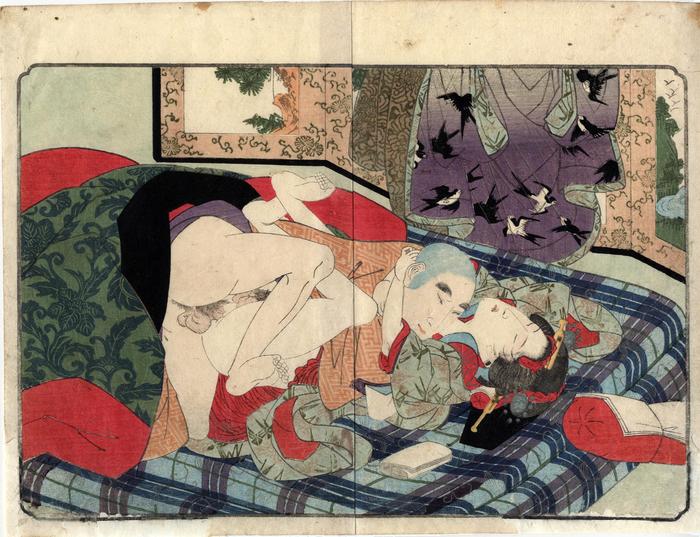 This scene from Shigenobu's excellent shunga Ama no Ukibashi - 'The Floating Bridge of Heaven' (3 vols w/ 21 works and text) presents a chief priest making love to a male najimi (regular partner). Their passionate encounter is emphasized by the red kukuri makura (stuffed roll pillow) which has fallen off the bedding.

The reference to Ukibashi (or Ukihashi, in many texts) is the most ancient reference to sex in Japanese literature. It first appeared in the Kojiki when Izanagi and Izanami, brother and sister gods, were standing on the bridge watching the movements of a wagtail, a bird, and got the idea of how to have sex. From that resulted the islands of Japan, many other gods, and eventually the Imperial family as direct descendants. Therefore, the title of this ehon in which this image appears is rich in meaning and historical references.

A kagema was a homosexual prostitute that sold his services at banquets.

"In Edo-period popular discourse, the work [wakashu] has at least three relatively distinct meanings. At its broadest, wakashu simply refers to an adolescent male... The second use of the word is as one of a pair of terms: nenja and wakashu. These refer to an adult male lover adn the younger male object fo his affection, respectively.... In the third usage, later in the seventeenth century, the term was also used as a synonym for boy prostitutes associated with the kabuki stage, or kagema, apprentice actors who stayed "in the shadows" (kage no ma) and functioned chiefly as sex workers."