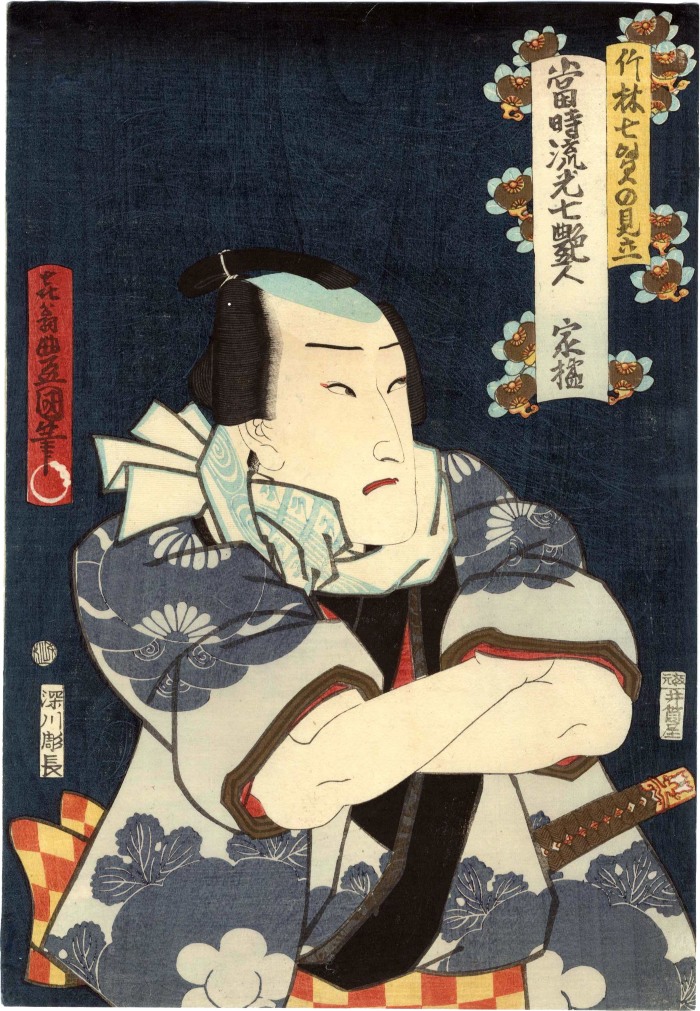 01/1862
9.5 in x 13.8 in (Overall dimensions) Japanese color woodblock print
Signed: Kiō Toyokuni hitsu (喜翁豊国筆)
Publisher: Izutsuya Shōkichi
Marks 188 - seal 24-055
Carver: Katada Chōjirō (Fukagawa Hori Chō)
深川彫長
MFA Boston
Waseda University
Tokyo Metropolitan Library
Lyon Collection - another print from this series
Mead Art Museum, Amherst College - another print from this series
Hankyu Culture Foundation The seven prints in this series done late in Kunisada's life are particularly striking. They are all of prominent actors portrayed under their poetry names. Were they all members of the same poetry club? Perhaps. In each of them, each actor is shown in his theater persona, either as an male in 5 cases or as an onnagata in the other two. The onnagata both are wearing large, prominent obi of orange and red checkered cloth. But something else is interesting about these prints: all of the male figures are wearing sashes made from the same material, but more subtly displayed. All of them are wearing light gray-blue robes decorated with their own personal crests in a light shade of purple. Each is set against a deep blue ground. Each title cartouche is surrounded by decorative flowers, the one exception being this print in which chidori are used.

7 actors posing under their poetry names

Who were the Seven Sages of the Bamboo Grove?

[The] "Seven Sages of the Bamboo Grove, also called Seven Worthies of the Bamboo Grove... [were] a group of Chinese scholars and poets of the mid-3rd century ad who banded together to escape from the hypocrisy and danger of the political world of government officialdom to a life of drinking wine and writing verse in the country. Their retreat was typical of the Daoist-oriented qingtan (“pure conversation”) movement that advocated freedom of individual expression and hedonistic escape from the corrupt court politics of the short-lived Wei dynasty (ad 220–265/266; Three Kingdoms period).

The group of friends gathered in a bamboo grove near the country estate of the writer and alchemist Ji Kang in Shanyang (in the south of present-day Henan province). Ji’s independent thinking and scorn for court custom led to his execution by the state, which was strongly protested by his several thousand followers; his execution testifies to the very real dangers that forced the Sages’ retirement from palace life....

The tensions that caused the forced retirement of the Seven Sages are revealed in their writings and those of other eremitic poets of the time. Their poems and essays frequently centre on the impossibility of palace life for the scholar (with criticisms of the court sometimes necessarily veiled in allegory) and the pleasures and hardships of country life. The retirement of the Seven Sages served as a model for that of later Chinese writers living in troubled times."

Quoted from The Encylopedia Britannica.

This is only one of 8 different prints in the Lyon Collection featuring Sawamura Tanosuke III. Five of them are by Toyokuni III and three are by Kunichika.

There are two interesting motifs on this print. On the onnagata's robe there are repeated patterns in mauve on a bluish-gray ground. Those patterns which look like scalloped shells are, in fact, chrysanthemums (kiku), the crest worn by more than one Sawamura Tanosuke. The other curious motif is the chidori surrounding the title cartouche.