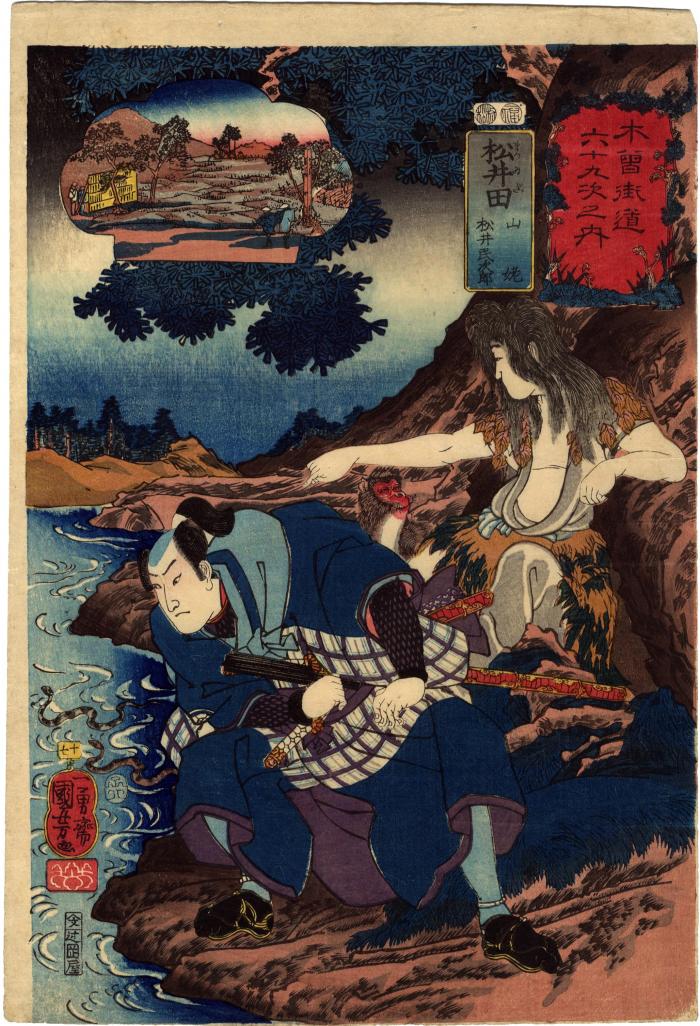 "Matsui Tamijirō, whose family name (Matsui) plus the first syllable of his personal name (Ta) sound like the place -name Matsuida, is probably the same person as Matsui Tomijirō Shigenaka, who is featured in one print in Kuniyoshi's series Biographies of Our Country's Swordsmen (Honcho kendo ryakuden), published around 1845-1846. The source of his story has not yet been identified, but fortunately the earlier print has a lengthy inscription explaining the same scene shown here in greater detail.

Tomijirō was walking alone in the mountains one evening when he came to a river. Suddenly a large group of snakes came out of the grass and swam together across the river to the other side. As Tomijirō was wondering why the snakes behaved in such an odd way, a strange woman appeared and explained that the snakes had crossed the river in a group because the water lever was dangerously high from rain the day before. She was a female immortal... and gave Tomijirō various medicinal herbs that were helpful to him on a later occasion when he fought a giant snake. Using the herbal medicines, he was able to protect himself from its poison.

In this version of the encounter in the mountains, Kuniyoshi not only changes the heroes name from Tomijirō to Tamijirō (or, on the title page, Tomigorō) to fit the place-name, he identifies the supernatural woman as none other than Yamauba, the Mountain Witch, mother of the child superhero Kintarō... Her hair and garments are appealingly disheveled and she wears a cloak of leaves. At her side is a friendly monkey, perhaps one of the animal playmates of her young son."