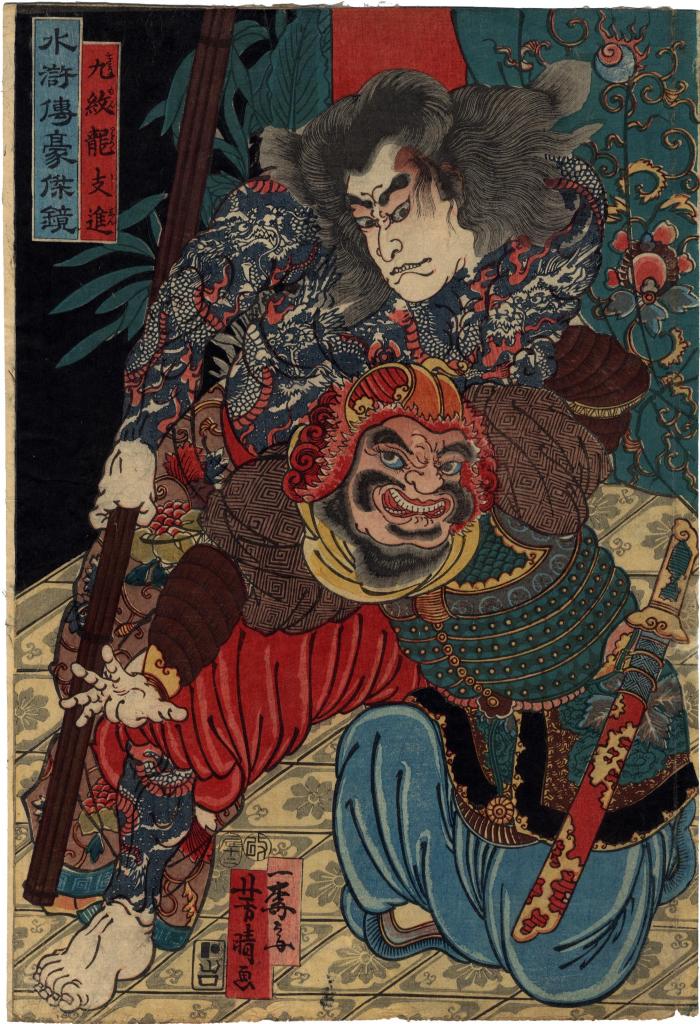 Kyūmonryū Shishin, nicknamed'The Nine-dragonned', was the son of a wealthy landowner. Unfortunately, after his father's death he spent more time on military affairs than on cultivating the lands he had inherited. One day he was challenged to a fight by Chōkanko Chintatsu, the leader of three robbers. They struggled together for a long time, but in the end the 'Nine-dragonned' was victorious and Chintatsu was taken into custody. When the other gang members came to plea for his release, Shishin was moved by their loyalty. The five became lifelong friends and joined the Suikoden.

"Let me tell you, honored teacher," the old man continued. "My clan has always lived here in Huayin Country." There before us is Mt. Shaohua. The village is called Shi Family Village. All of the three or four hundred families in it are name Shi. My son, since childhood, has had no interest in farming. He cares only for play with weapons. His mother tried in vain to talk him out of it. She finally died of worry. I had to let him have his way. I don't know how much money I've spent on weapons teachers. I also paid a skilled tattooist to decorate his arms and chest with dragons - nine in all. For that reason he's known throughout the country as Nine Dragons Shi Jin. It's good that you've come, Instructor, and can complete his training. I'll reward you handsomely."

One of Yoshitoshi's prints of "One Hundred Aspects of the Moon" shows Shi Jin sitting quietly by himself in the moon light. John Stevenson wrote about the background of this prints:

"Shi Jin was the son of a wealthy landowner in Shandong, a province in eastern China. He was well trained in the martial arts, which he much preferred to farming. One evening in the middle of the sixth month by the lunar calendar (high summer), he was sitting quietly under a willow tree, fanning himself in the heat, when he learned that three bandit chiefs were planning to attack his village. He succeeded in capturing them, but released them when he heard their stories of the oppression and injustice which had forced them to become outlaws.

This made Shi Jin an outlaw also, and he fled to avoid arrest. He joined a group of bandits whose base was a marshy area of lakes, "water margin," from where they terrorised two whole provinces. Their opposition to wicked landowners and corrupt officials made them heroes with the local people. They gained a reputation for high-principles, chivalrous deeds, which became the material of literature.

Shi Jin is shown in his home village, before his flight. Along with allhis bandit-colleagues, Shi Jin was heavily tattooed. Tattoos were associated with toughness, and when they appear in woodblock prints are an indication of physical courage. Shi Jin's tattoo is a spectacular pattern of nine dragons, hence his nickname Kumonryū, "Nine Dragoned." Tattooing was an is practiced primarily by Japan's lower classes, especially yakuza gangsters, laborers, and prostitutes. One can still occasionally see impressive tattoos on a visit to the public baths in Japan, though some bathhouses specifically exclude tattooed customers. Tattooing is said to have originated with fishermen, who decorated themselves to scare away sharks and sea monsters when they were swimming in the ocean. The practice was noted in the earliest Chinese chronicles to describe the people of Wa, the inhabitants of the Japanese islands, in the third century."