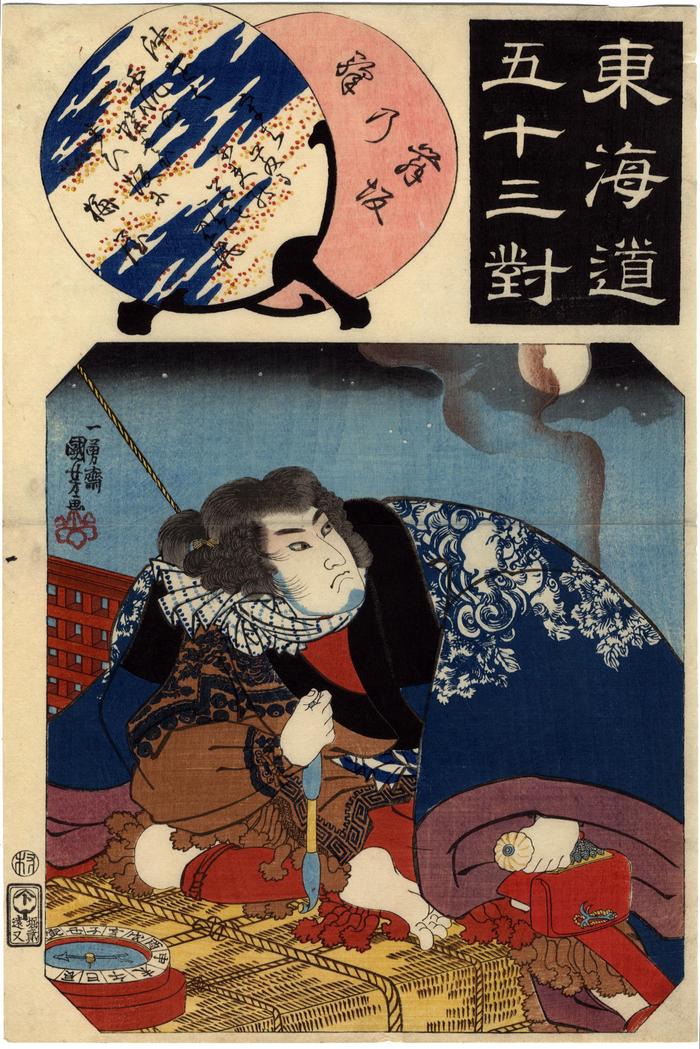 According to the side notes in Tōkaidō Texts and Tales: Tōkaidō gojūsan tsui on page 105 there are three known editions of this print. In the first edition the black at the top of the image is sprinkled with mica (kirazuri). The blue at the edge of his sleeve is decorated with a thunder pattern or raimon. The clouds on the fan at the top are printed in green. "On the right side of the print, rising smoke covers the left half of the moon."

In the second edition, like the one in the Lyon Collection shown here, the pattern on the sleeve is gone, the clouds in the fan in the upper left are blue, but the smoke still rises up toward the moon. In the third edition there are no clouds on the fan, no decoration on the sleeve and no rising smoke.

"During the course of an overland journey, Tokugawa travelers would have found it difficult to avoid stepping into a boat at some point to cross a body of water. Water crossings at rivers, as well as an open-sea crossing (between Miya and Kuwana) and passage across a lake, Lake Hamana (between Maisaka and Arai stations), were integrated into the Gokaidō network.

A trip down the Tōkaidō, for example, involved crossing twelve rivers and possibly the two longer stretches mentioned above as well. Jippensha Ikku's characters Yaji and Kita make the trip by boat from Maisaka to Arai. Ikku describes the situation at Arai, where "all the passengers got off the boat with cries of thankfulness that they had arrived in safety." Travel by boat was more dangerous than going overland. In fact, not traveling by sea was one of the precepts the doctor Tachibana Nankei (1753- 1805) followed when away from home. The alternative, land routes, however, were circuitous and therefore took longer. Two routes connected to the Tōkaidō, the Sayaji and the Honzaka dōri, were also dubbed "hime kaidō" (lit., "princess roads"), supposedly because women, having less "stomach" for water travel, opted for them more often than did men."

Quoted from: Breaking Barriers: Travel and the State in Early Modern Japan by Constantin Vaporis, pp. 34-35.

Two interesting points about Maisaka in 1843: the population was 2,475 living in 541 households. There were 3 so-called daimyō inns and 28 inns fit for commoners. The second point is that whenever a census was taken villages which fronted on bodies of water had to report, under penalty of law, how many boats were available for fishing or transporting travelers. In 1845 were were 200 boats registered for Lake Hamana (浜名湖).

Kezori Kuemon, a manly looking man, and not one apt to travel the 'princess roads', is clearly traveling on a boat. The blue behind him could be either the night sky or the water of the lake. There is a rope line to a sail behind him. In the bottom left of the image is an elaborate, well-defined compass. He is holding a pipe, while his tobacco pouch has an applied anchor decoration. It is hard to tell where the smoke is coming from unless he has just tapped out his tobacco embers.

His blue and white outer robe is decorated with a lion among peonies.

Notice the compass in the lower right corner, an unusual instrument to be seen in Japanese prints.

Translation and notes by Ann Wehmeyer: "I see the white sails dancing / like butterflies in the offing / as the white flowers of the waves / roll into the shore / at Maisaka"

"The poem combines the senses of dancing (mai) butterflies and sloping (saka) shore, along the place-name Maisaka."

The actual story about Kezori Kuemon took place between Honshu and Kyushu, but for aesthetic reasons Kuniyoshi chose to place him off of Maisaka, following the meaning of Umenoya's poem.

2) full-page color in Tōkaidō Texts and Tales: Tōkaidō gojūsan tsui, p. 104. Two editions of this print are illustrated four times in this book in color. First on pages 104 and 105 and again twice on page 175.

The original Tōkaidō was established by the Kamakura bakufu (1192-1333) to run from Kamakura to the imperial capital of Kyoto.

Andreas Marks wrote in 'When two Utagawa masters get together. The artistic relationship between Hiroshige and Kunisada' in Andon 84, November 2008, pp. 37 and 39:

"The artistic relationship between Hiroshige and Kunisada entered a new period in 1845, when both artists were commissioned to contribute to the series Fifty-Three Pairs of the Tōkaidō (Tōkaidō gojūsan tsui). The Fifty-Three Pairs of the Tōkaidō is an example of a series where a number of artists were commissioned to contribute complete and individual designs under a specific theme. A few years before, the Kisokaidō series by Hiroshige and Eisen had been published with the same concept. This concept became quite common in the second half of the 1840s until the early 1850s, and sometimes the artists were supported by their disciples who drew inset cartouches.

The main contributor to the Fifty-three Pairs of the Tōkaidō was actually Kuniyoshi with 30 designs, followed by Hiroshige (21 designs), and Kunisada (eight designs)." This series of 59 ōban falls in a period when designers, actors, writers, and publishers had been imprisoned or expelled from Edo in the aftermath of the so-called Tenpō reforms (Tenpō no kaikaku). Only the joint effort of six different publishers made this series possible."

The carver, who remains unknown, tried to give us appearance of eyelashes on the face of Kuemon. This is rarely done in Japanese woodblock prints.

Laura W. Allen wrote about these fan-shaped cartouches on page 9 in 'An Artistic Collaboration: Traveling the Tōkaidō with Kuniyoshi, Hiroshige, and Kunisada' in Tōkaidō Texts and Tales: Tōkaidō gojūsan tsui by Kuniyoshi, Hiroshige, and Kunisada: "At the outset someone decided that the publishers would promote their individual brands through the use of different-shaped cartouches... at the top of hte prints in the set: a bean shape (mame) for Ibaya Senzaburō (active 1810s to 1860s), a fan shape (ōgi) for Ibaya Kyūbei (active ca. 1804 to 1850s), two overlapped snowflake roundels (yukiwa) for Kojimaya Jūbei (active 1790s to 1860s), two overlapped round fans (uchiwa for Enshūya Matabei (active 1760s to early 1880s), a stylized shrimp (ebi for Ebiya Rinnosuke (active 1830s to 1890s), and a square (kaku for Iseya Ichiemon (active 1820s to 1860s). The six men were all former members of the fan makers' guild, and they worked in close proximity to each other, sharing or independently operating shops within the same Edo neighborhood, Nihonbashi Horiechō, all within the blocks designated as Itchōme and Nichōme. It was only the dissolution of the guild system during the Tenpō reforms that allowed other craftsmen, such as these former fan makers, to begin publishing single-sheet prints. The Tenpō reforms thus stimulated not only artistic change - in the development of new themes - but also social mobility, as the fan makers came to occupy new terrain with the publishing industry."