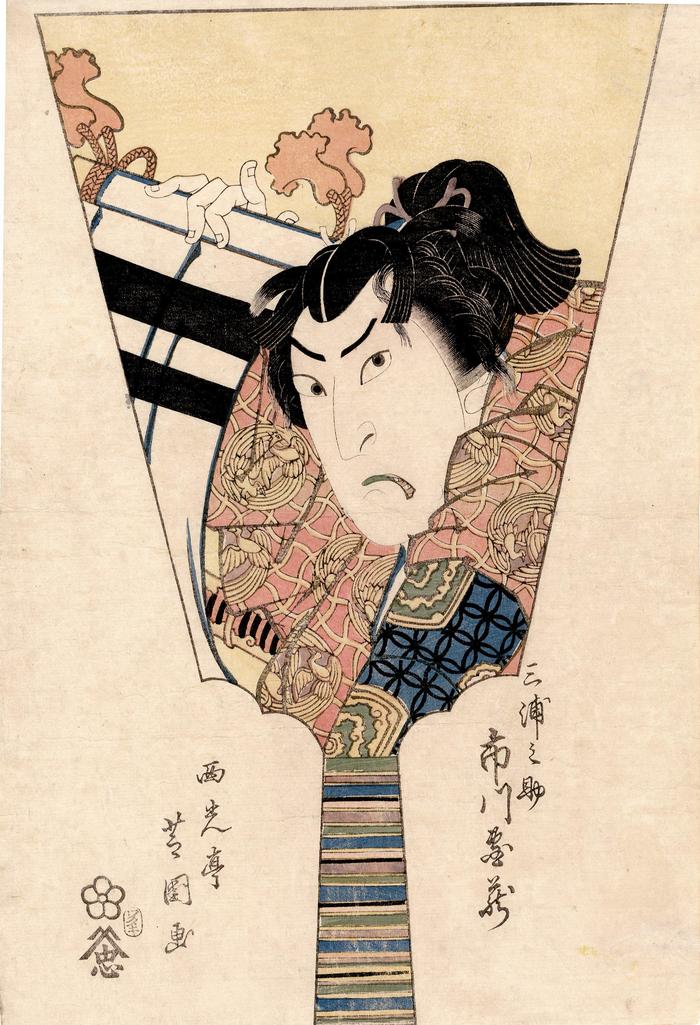 Print in the shape of a battledore. Danzō's lower lip is green because it would mean that he was wearing sasabeni, a safflower cosmetic product as expensive or more so than the price of gold. It is a subtlety, but one that seems to appear on male actors more often in Osaka prints of a certain age. Mostly it was high-classed courtesans that wore this lip gloss. It is also interesting that it is almost always exclusively worn only on the lower lip.

Miuranosuke cut off his own head

"Miuranosuke and his betrothed, Princess Toki, are living in the village of Kinugawa in the home of his ailing mother, Nagato. However, the marriage arrangement is fraught with uncertainty. Miuranosuke is an enemy of Toki's father, Hojo Tokimasa, and therefore has doubts whether he can trust where his fiancée's allegiances lie. One night, two of Tokimasa's retainers come to Nagato's house to convince the Princess to murder Nagato and return to her father. Unswayed by their [en]treaties and steadfast in her love, the Princess resolves to kill herself as proof of that commitment. Miuranosuke intervenes, and together they come to the decision that if they are ever to live in peace they must murder her father. Unfortunately, but not surprisingly, their story ends in tragedy. Word of their plot precedes them as they make their way to Tokimasa's mansion, and in response the compound is well-guarded. Toki is brought before her father, while Miuranosuke is faced by an overwhelming force on the mansion grounds. Miuranosuke becomes fatally wounded, and cuts off his own head. Facing her unforgiving father and devastated to hear of the death of her lover, the Princess kills herself with a dagger."

The source is Scholten Japanese Art. See also The Kabuki Handbook by Halford and Halford, pp. 131-136.

Miuranosuke appears to be holding a war banner. While it only shows two parallel black stripes, it may be a reference to his personal crest which is made of three bars evenly spaced - often, but not always, within a circle. This motif can be found on several representations of this figure in prints by Toyokuni I, Toyokuni III, Kunihisa II and Kunichika.

A copy of this print is illustrated in black and white in Ōsaka Kagami 大阪鏡 by Jan van Doesburg, p. 51.