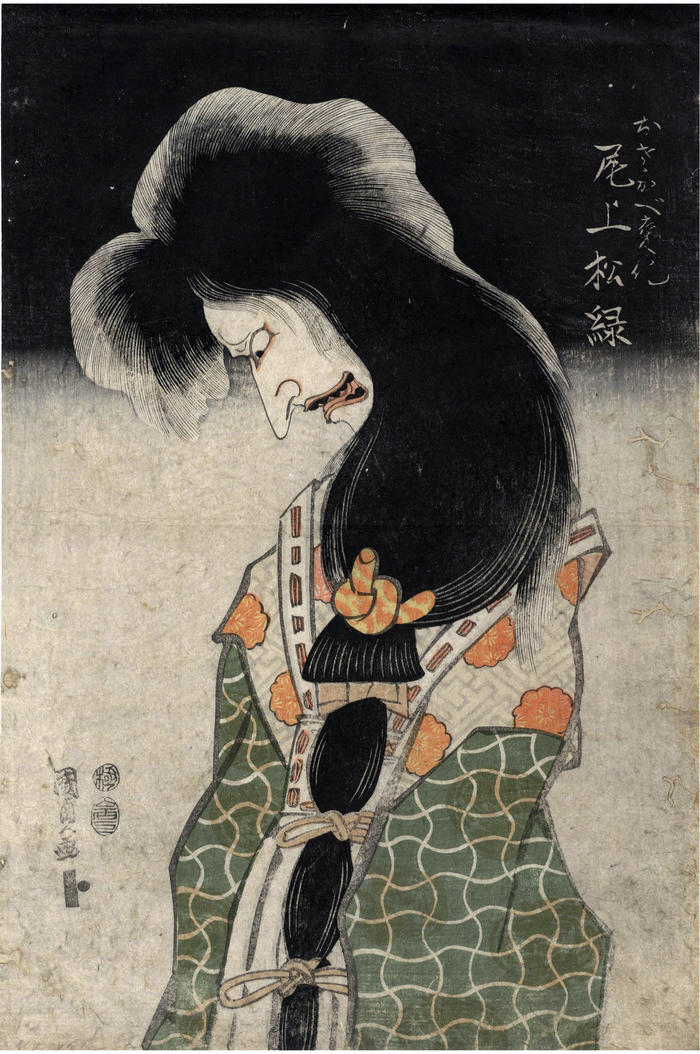 This print represents a scene from the play Matazoro Shōroku Osakabe banashi (Shōroku's Revival of the Story of Princess Osakabe - 復再松緑刑部話) staged in the fifth month of 1814.

"Onoe Shōroku (1744-1815) was famous as a performer of ghost roles. Here he appears as the sixteen-foot-high apparition of Princess Osakabe.... The part of Osakabe required a great deal of strenuous physical action, and the seventy-year-old Shōroku was criticized for taking it on when he was past his best. This spectacular scene was performed in 5/1814. It tells the story of the ghost of Princess Osakabe haunting the warrior Hayakawa Takakage at Himeji castle.

"One eyewitness account by a child included in a critique stated: 'I was so terrified [of the spectre] I tried to get away... It was awful not being able to escape because of the huge crowd."

Quoted from: Kunisada: Imaging Drama and Beauty by Robert Schaap, p. 75. This is accompanied by color reproduction of this diptych from the Royal Museum, Brussels.

"The play became one of the ten favorite plays of the Onoe family, compiled by Onoe Kikugorō V (1845-1903) during the Meiji period (1868-1912) in reaction to the so-called Eighteen Plays (Kabuki jūhachiban) established by Danjūrō VII as the repertory restricted to the Ichikawa family."