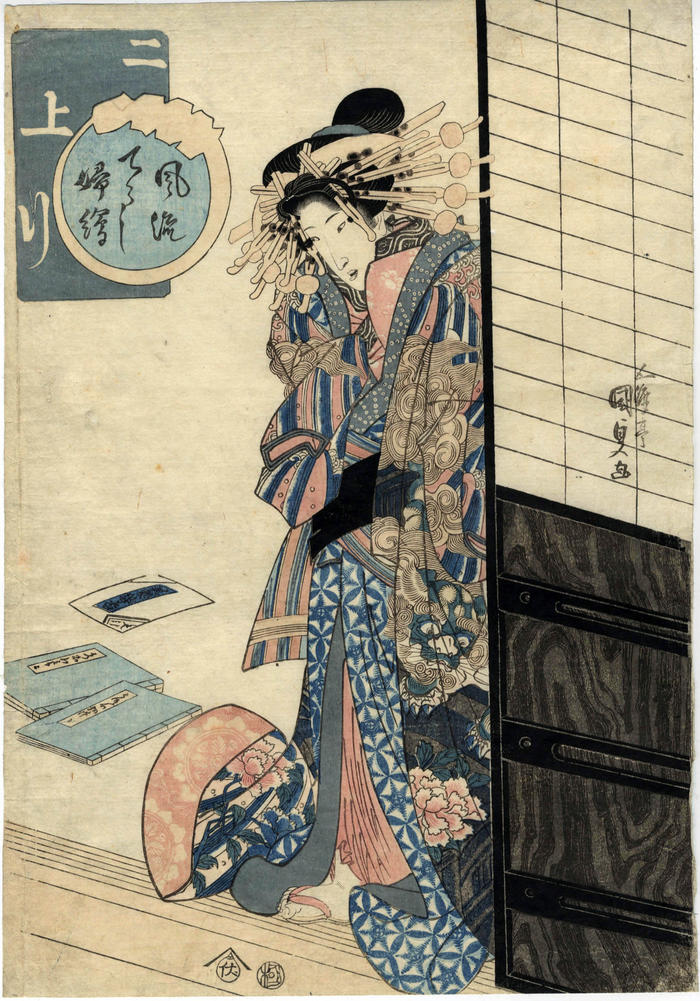 This woman represents the highest order of courtesan. She is wearing a robe decorated with a gamboling lion among peonies. The stripes represent a turbulent waterfall. There is another copy of this print illustrated in a 1979 article entitled 'The Bijin-ga of Utagawa Kunisada', written by Sebastian Izzard in Impressions. That print does not have this print's publisher's seal.

We know of at least ten prints from this series. As you will see from the links above there are two different publisher seals on the examples we have found. These are for Iseya Rihei and Fushimiya Zenroku. Of course, there is only one seal per print. This can be explained in several ways: 1) this series was originally published by one house and the blocks were later sold and reprinted for a new edition. Or, 2) the original series was parceled out to more than one house. Naturally there are other possibilities, but these are the ones that make the most sense... until we know otherwise. If for example, we should ever find the same image published by both houses then we would know that one was the earlier edition and one the later one. But until then...

There was at least one other later edition of this print. In that one many of the fine black lines of the woodblock have broken and there is no publisher's seal. In all likelihood, this was a popular series.

There is another print in the Lyon Collection of a high ranking courtesan wearing a kimono decorated with a lion and a peony. That one is by Eizan and can be found at #731.
Fushimiya Zenroku (伏見屋善六) (publisher)
beautiful women (bijin-ga - 美人画) (genre)