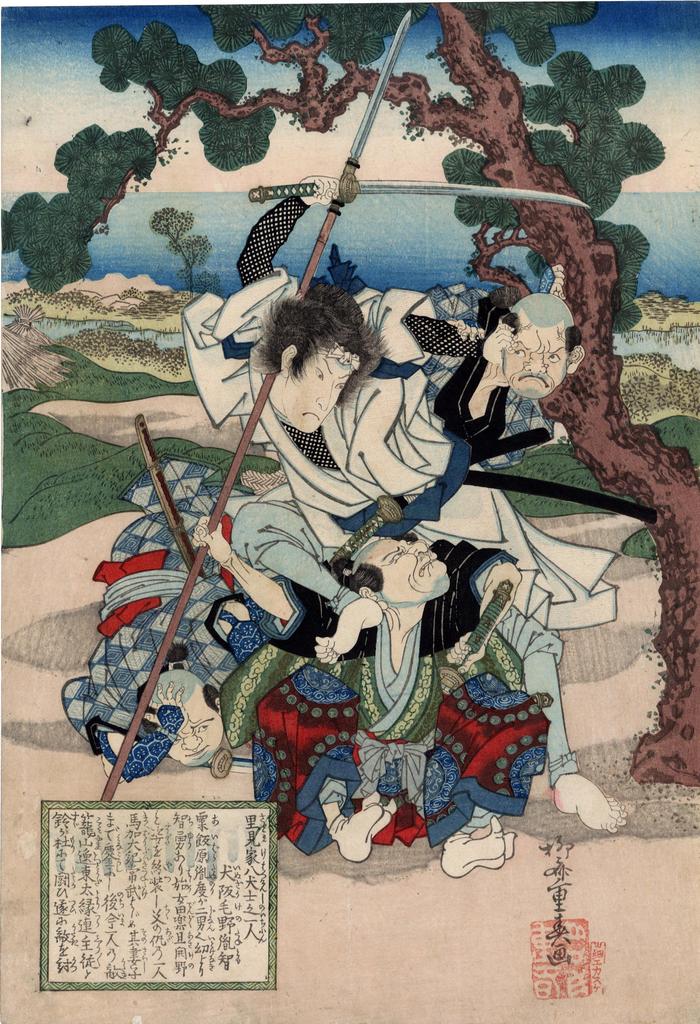 Reproduced in a small illustration in black and white, #328, Keyes' The Theatrical World of Osaka Prints.

Keyes also gives a different reading of this series of prints as Satomike Hakkenshi no uchi Ichinin.

Keyes identifies this actor as Bandō Jutarō I, but Kitagawa in the Kamigata yakusha-e shūsei, vol. 2 (1998), #168 says it is Onoe Kikugorō in this role. Jutarō is said to have portrayed Inukawa Sosuke Yoshito.

"In 1814 Bakin began writing The Eight Dog Chronicles, a historical novel of the strange and supernatural set in a time of medieval war. By the time he had completed it, in 1842, the work spanned 106 volumes, making it one of the world's longest novels. Because Bakin's eyesight began to fail in he temporarily stopped writing Eight Dogs but finally was able to complete the work with the help of a scribe. The popularity of Bakin's yomihon reached unprecedented heights in the late Tokugawa and early Meiji periods. Even though it was severely criticized by the influential Meiji critic Tsubouchi Shōyō for its lack of realism and for its didactic framework of 'encouraging good and chastising evil,' the popularity of Eight Dogs continued unabated through the late Meiji period.

One of the outstanding characteristics of The Eight Dog Chronicles, considered the epitome of the yomihon, is its elegant style, which uses classical diction and Chinese compounds as well as classical rhetorical flourishes such as engo (word associations) and kakekotoba (homonyms), often in a melodious 5-7 syllabic rhythm. At the same time, Bakin sought to create a work on the kind of vast scale found in Water Margin, a narrative that would be the Japanese equal of that great Ming novel. Besides sharing the hallmarks of earlier yomihon — the interest in the supernatural and the use of the principles of rewarding good and punishing evil and karmic causality — The Eight Dog Chronicles stresses the need to overcome attachment and seek enlightenment.

Bakin's primary interest, however, was in human psychology and behavior. His favorite Japanese text was the Taiheiki (Record of Great Peace), the mid-fourteenth-century medieval chronicle that describes the war-torn period of the Northern and Southern Courts. He admired the samurai ideals found in such historical and legendary narratives, but he also sympathized with the oppressed and those who had met with misfortune in the past. In The Eight Dog Chronicles, he gives them new life in an imaginary world. The full title of the book is The Chronicles of the Eight Dog Heroes of the Satomi Clan of Nansō (Nansō Satomi hakkenden), which refers to eight little-known fifteenth-century heroes (each with 'dog' in his name) who helped the Satomi clan reestablish itself in Awa Province (Chiba) and later expand north to the area known as Nansō, thus establishing its rule over most of the peninsula east across the bay from what later became Edo. Despite its praise for warrior values, the book may be obliquely criticizing Tokugawa corruption, especially under the shōgun Tokugawa Ienari (r. 1787-1837). The Tokugawa shōgunate regarded the Satomi as enemies and confiscated the clan's lands in 1614.

The Eight Dog Chronicles revolves around conflicting issues of morality, spirituality, fate, duty, sincerity, filial piety, and chastity, enforced in different ways by Confucian, samurai, and Buddhist values (of detachment, enlightenment, and karmic retribution) and complicated by the simultaneous associations of animality (carnal desire) and virtue (fidelity, self-sacrifice) implicit in the various dog figures. While praising warrior-class and Buddhist values, The Eight Dog Chronicles reveals Bakin's obvious fascination with carnality and commoner culture, which gives a compelling quality to a wide variety of characters, even those who are morally weak or evil. The book also raises fascinating issues of gender and human-nonhuman relations. The book presents a number of strong female characters, such as the brave young woman Fusehime, who is the spiritual creator and inspiration of all eight heroes. The Eight Dog Chronicles also contains many suggestions of androgyny, a common late-Edo theme. In the scenes translated here, Fusehime is described as being manlike, and by spreading her seedlike soul beads, she becomes the virtual mother-father of the eight heroes. Yatsufusa, who marries Fusehime, is a male dog possessed by a female soul. Shino, the first dog-hero to appear in the story, grows up disguised as a girl and imitates a female god. Fusehime is faced with the tragic dilemma of attempting both to achieve spiritual purity and preserve her chastity and to accept her destiny of bearing the children of a dog."

There is another copy of this print in the Worcester Art Museum.