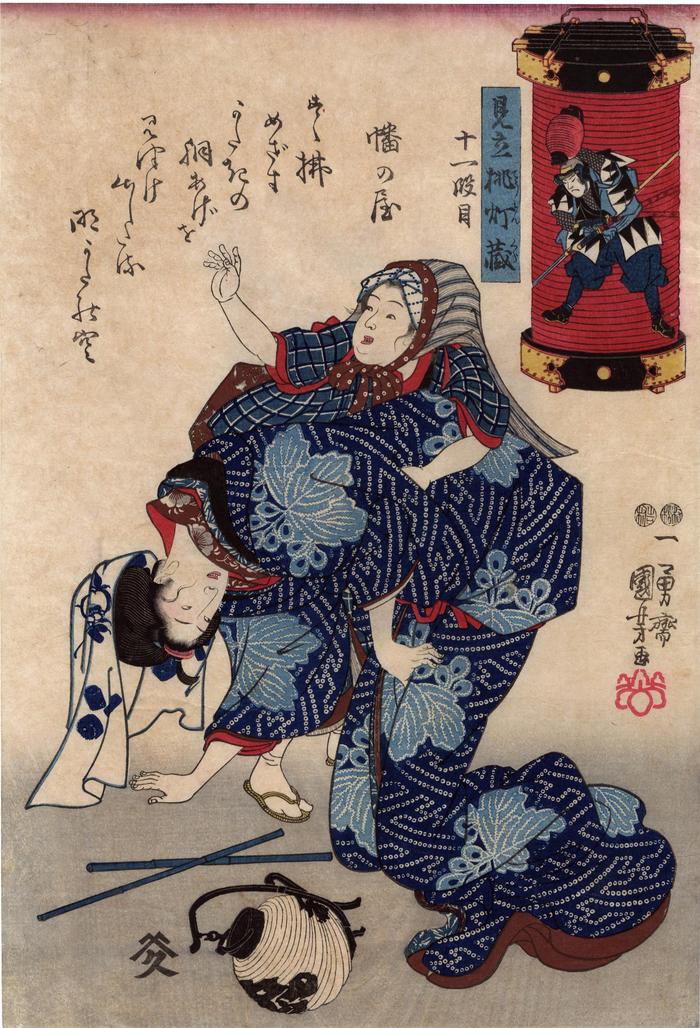 As with so many other prints in the Lyon Collection this one can be viewed on several levels. Of course the first one is the immediate effect of a quick glance: a beautiful woman with her child on her back, a lantern lying on the ground and in the upper right is a collapsible lantern with the figure of a warrior on it. On the next level is something the casual viewer cannot know and that is that each of the prints in this series are related to a Chūshingura ('Tale of the 47 Loyal Retainers') focusing on scenes related to the super-evil character Moronao. But it is the third level that is the most difficult to sort out and yet it may be the most important. It is this level that unlocks a lot of the hidden meanings.

It is on the third and deepest level that some of the most significant metaphorical action is taking place. None of it clearly visible and none of it clearly knowable. I am not even sure that the average contemporary Japanese citizen would recognize what is going on here, let alone a non-Japanese lover of ukiyo-e. Somehow this scene relates to both the kotohajime (事始め), a special day for an extra thorough cleaning to drive away dirt, i.e, malevolent forces, and the murder of Moronao.

In some ways the kotohajime functions somewhat like setsubun (節分) or the 'bean throwing ritual' during which evil spirits are driven out of the home. However, one difference is when these rituals are performed. Traditionally kotohajime took place in Edo on what is now comparable to December 8 while in Kyoto it was December 13. People are summoned at night to perform this act, because it must be done when it is darkest out. The child raising his arm is tantamount to calling the people to do this. The child's action also mirrors the action of the ronin on the lantern who is about to give the final blow to Moronao, thus driving out the truest evil of all.

On a side note is the fact that many modern dōjō are said to perform the kotohajime to enact a more thorough cleaning once a year. No nook or cranny is left uncleaned.

There are 11 prints in this series corresponding to the 11 acts in the Chūshingura and aspects of the role played by Moronao. The actual title of this series was Mitate chōchingura. Allen Hockley wrote of another print in the series: "Chōchin, the word for lantern, is a pun on the word chūshin, or loyal retainer, for which the play is named."

Notice the woman's robe or yukata (浴衣) has a pauwlonia or kiri pattern which mimics the artist's personal seal, but was also the crest of the arch-villain of the Chūshingura, Moronao. One of the aesthetic glories of the world is the decoration found on Japanese fabrics. Here it is a tie-dye shibori (絞り) cloth of white dots on a deep blue ground.

The figure in the lantern cartouche in the upper right is holding a lantern which he will need to use to see during the nighttime attack on Moronao's compound. (JSV)

The text above the woman and child reads:

The dentate pattern on this print is a give away that it is a Chūshingura-themed prints. But not all prints devoted to this story show these designs. "The distinctive dentate pattern on the coats is an iconographical motif which represents the inescapable progress of day and night, symbolizing unfailing loyalty."