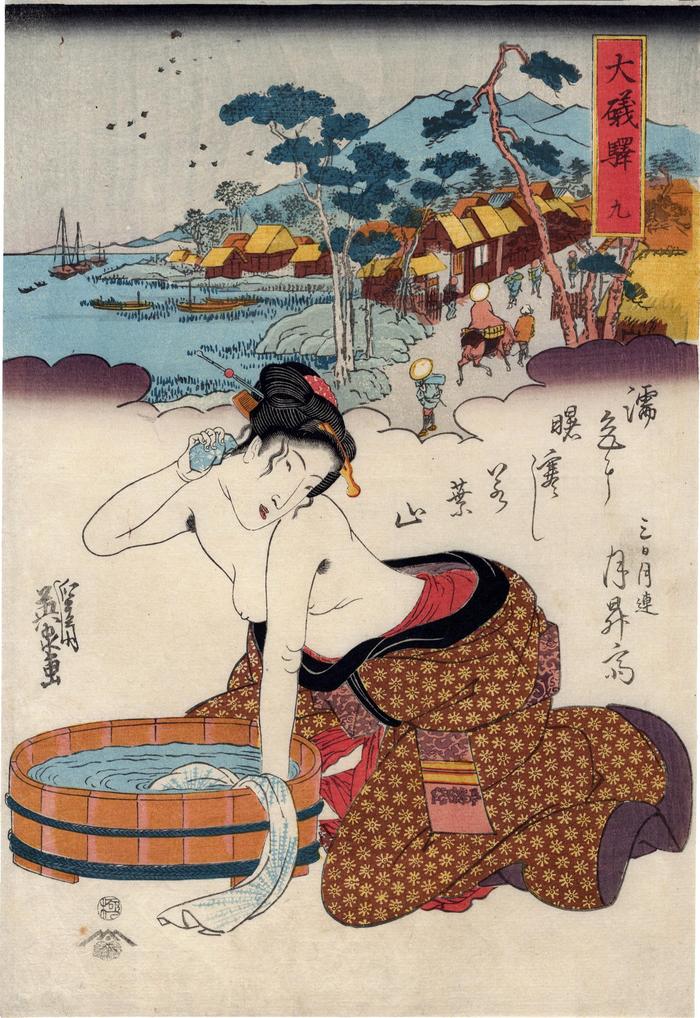 In Masterworks of Ukiyo-e:"The Decadants" by Jūzō Suzuki and Isaburō Oka it says on page 88: "This series of scenes at stations on the Tokaidō Highway, each with a woman in the foreground and a landscape behind her, is one of the better works of Eisen's last years. The woman shown washing her neck in this print is a type already familiar from earlier ukiyo-e, but Eisen achieves his own special effect of actuality and sensual appeal."

One source says that the first edition of this print is the one with the poem printed on it.

There is no question about the authenticity of this print, but it is fun to compare this one in the Lyon Collection to the one we have linked to in the Museum of Fine Arts in Boston. Nearly everything is the same: most of the coloring, etc, but there are differences, too. Notice particularly the deep blue of the area of the water in the MFA example. It is almost as if it had butted up against a wall by the tree closest to the woman's head. The printing in that case is a bit jarring, whereas the example shown here is more fluid and therefore believable. Also, the one in Boston shows some issues with the inking of the end of the woman's dangling obi, whereas there is no such problem in the Lyon Collection example. Another difference is in the number of birds flying through the air. There are four in Boston and many more in this example. All in all, our guess is that the Boston Eisen is from an earlier edition, but both prints, theirs and ours are good and convey clearly what the artist intended.

If you click on the links to the examples in the Tokyo National Museum and the Chiba Museum of Art you will see that they too have the same deep blue 'wall' of water that ends abruptly at the tree, the same as the one in Boston, but unlike the Boston example with its four birds the one in Tokyo has the same number of birds as the one in the Lyon Collection. The one in the Keio University Library comes from the same edition as the one on this page. (JSV)

Kunisada must have been particularly struck by the pose of the woman washing herself, because there are more than one knockoff prints designed by him in which this figure is as prominently displayed as this one by Eisen. See the link to the Toyokuni III above at the collection of the Tokyo Metropolitan Library.

5. In a small black and white reproduction in the Illustrated Catalogues of Tokyo National Museum: Ukiyo-e Prints (2), #2466.

The original Tōkaidō was established by the Kamakura bakufu (1192-1333) to run from Kamakura to the imperial capital of Kyoto.
Tsutaya Kichizō (蔦屋吉蔵) (publisher)
beautiful women (bijin-ga - 美人画) (genre)