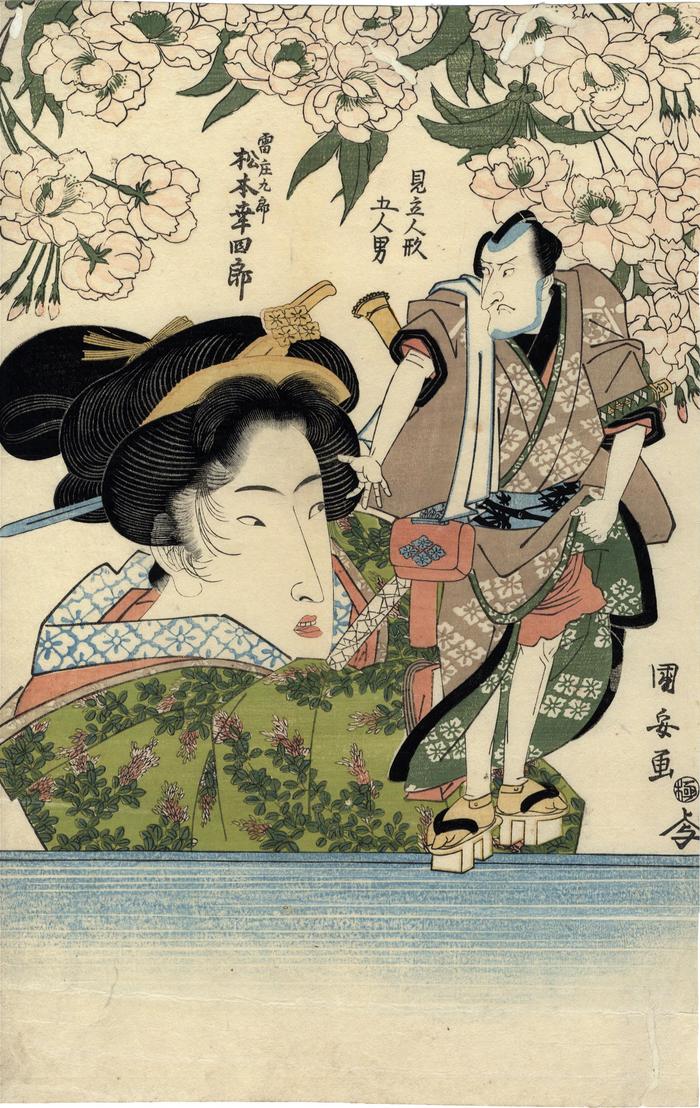 Kaminari Shōkurō, like all of the men who came to be known as otokodate, was a criminal and a rogue who was glamorized in later lore. "Became homeless in 1692. Injured someone in Minami Horie in 1698; linked up with a gang led by Kenkaya Gorōemon; associated with Seven's Gang from at least the Tenth Month of 1699. Formally joined the latter gang in late 1700, cutting ties with Goroemon in the Second Month of 1701. Arrested on the tenth day, Sixth Month, 1701, in connection with the investigation of Seven's Gang. Beheaded on the twenty-sixth day of the Eighth Month, 1702."

Quoted from: Osaka: The Merchants' Capital of Early Modern Japan in an essay by Gary Leupp, 'The Five Men of Naniwa: Gang Violence and Popular Culture in Genroku Osaka', pp. 134-35. (JSV)

The otokodate frequently carried shakuhachi> flutes both for playing and to as symbols of their authority because they often used them as weapons. In this image the 'puppet' is carrying it on his back and can be seen partially poking out near his right shoulder. (JSV)
beautiful women (bijin-ga - 美人画) (genre)
actor prints (yakusha-e - 役者絵) (genre)
Uemura Yohei (上村与兵衛) (publisher)
Matsumoto Kōshirō V (五代目松本幸四郎: 11/1801 to 5/1838) (actor)
Otokodate - chivalrous men (男伊達) (genre)