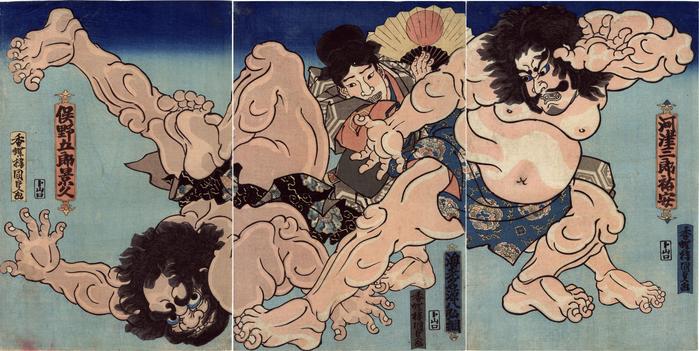 "Kunisada produced several versions of this match, the earliest of which is dated to about 1812. In this later version Kunisada employs the strong colors of the Tempo era and the Chinese-style clothing patterns that had become fashionable int he late 1820s. The heavy outlines and caricatured faces are typical of the bold drawing in the style of Katsukawa Shun'ei that was used by Kunisada to portray this type of scene.

This celebrated match, refereed by Ebina Gempachi, took place during a hunting expedition organized by the general Minamoto no Yoritomo in 1176 near Mt. Akazawa. Matano Gorō Kagehisa, who had some professional experience as a wrestler, challenged members of the party and defeated them one by one. He then challenged Kawazu Saburō Sukeyasu, who, after first refusing, pushed Matano back and threw him to the ground. Matano claimed that he had tripped and a rematch was held. Kawazu twisted his foot behind Matano and toppled him, a trick throw still known as the kawazu in his honor. Kawazu was later found murdered and his two sons, Jūrō and Gorō, gained renown when they sought revenge, an act well known as the vendetta of the Soga brothers..."

Lawrence Bickford in his Sumo and the Woodblock Print Masters dates this triptych to 1842. No other source gives such a late date. Not only that Bickford implies that Kunisada was trying to get around the restrictions which had been put on elaborately printed woodblock images. His argument is that that explains why there are no censor's seals on any of these panels.

This triptych is illustrated in Bickford's book at #44 on pages 42-43.

Also illustrated in color in 'On the Composition of Utagawa Kuniyoshi's Wide Screen Works' by Nakayama Sota in Journal of East Asian cultural interaction studies, 2014, #5, p. 95. [We believe that the term 'Wide Screen' is tantamount to 'triptych'.]

There is another copy of this triptych illustrated in black and white in Ukiyo-e Masterpieces in European Collection 5: Victoria and Albert Museum II, Kodansha, 1989, on page 162.