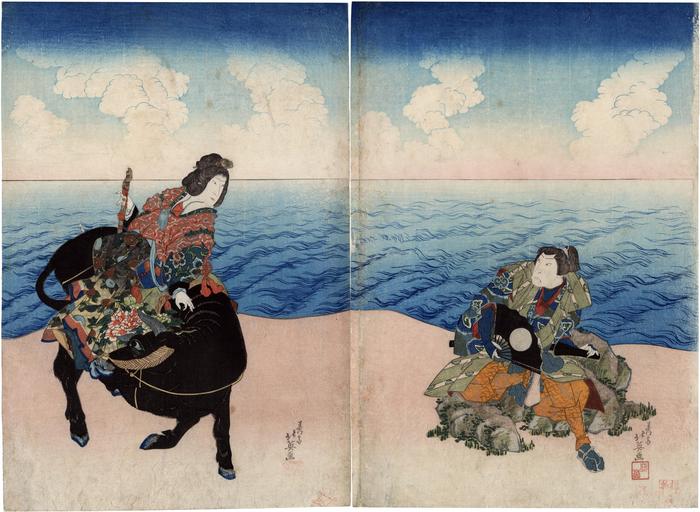 Roger Keyes in The Theatrical World of Osaka Prints wrote on page 130: "According to historical accounts, Chinzei Hachirō Tametomo, a renowned archer and warrior of the Genji clan, was born to a courtesan in 1139. By the age of fifteen he was already seven feet tall and had conquered half the castles in Kyūshū. While battling the Heike general, Kiyomori, he was captured and exiled to Ōshima, a group of islands that he subdued and set about ruling. An army was sent from the mainland to quell him once and for all, the continuation of the tale by Takizawa Bakin, escaped from Ōshima the Isles of Women. Later shipwrecked, he was cast ashore in Okinawa where he defended the princess of the island against usurpers, married her, brought peace, and produced a son who became king. In the present print, the castaway Tametomo has just arrived on the shore of Okinawa and is sighted by the princess of the island, Neiwanjo, who rides toward him on a water buffalo."

Osaka Prints said of this diptych:

"The Tametomo depicted in Hokuei's print is based on an epic tale written by Takizawa Bakin (1767-1848). It was published in fiction-book format in 29 volumes from 1807-11 under the title "Strange Tales of the Crescent Moon" (Chinsetsu yumihari zuki). In this version, Tametomo finds refuge in the Ryûkyû Islands. When Tametomo shipwrecks at Okinawa in the Ryûkyû archipelago, he defends Princess Neiwanjo against a minister plotting to take over her throne. He then marries her and fathers a son who becomes the first in a lineage of Okinawan kings, the ancestors of Ashikaga Takaiji (1305-58), who established the Ashikaga shogunate, reigning from 1336 to 1568. Tragedy strikes, however, when Neiwanjo dies. Tametomo then follows her to heaven, leaving their son to rule."

Later they added: "Hokuei's diptych depicts the first meeting between Tametomo and Neiwanjo. The princess rides upon a water buffalo as she approaches Tametomo on the Okinawan shore. Seated on a rock, the warrior holds his battle fan (gunsen), grips his sheathed sword (katana), and raises one leg in a posture of readiness. The figures are isolated against an unusually conceived seascape, with a gently rolling sea, ruler-straight horizon line, and repeated groupings of stylized cloud plumes. The latter show the influence of Occidental art and, in particular, the works of Katsushika Hokusai, for a brief time the teacher of Hokuei's master, Shunkōsai Hokushū."