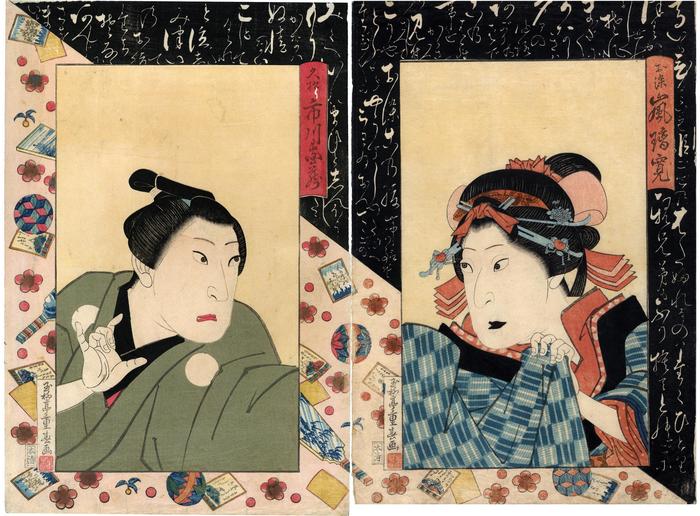 A diptych with bust portraits with a border of New Year's game cards, balls, battledore and shuttlecock and calligraphy.

Unlike other kabuki themes the story of Osome and Hisamatsu is included in nearly all the volumes written about this form of theater.

The National Theater of Japan wrote: "Hisamatsu was originally the son of a samurai, but was brought up as the adopted child of Kyusaku of Nozaki Village, a peasant and the older brother of Hisamatsu’s wet nurse. He is apprenticed to an oil merchant in Osaka, and falls in love with Osome, the merchant’s daughter, but is sent home to Nozaki Village due to money trouble. Osome, pregnant with Hisamatsu’s child, comes from Osaka to visit the village just as marriage talks between Hisamatsu and his fiancée, Omitsu, are going ahead. Hisamatsu decides to commit double suicide with Osome, and Omitsu, who sympathizes with them, backs out and becomes a nun."

And the right-hand panel in black and white in 2) in 原色浮世絵大百科事典 (Genshoku Ukiyoe Daihyakka Jiten), vol. 9, p. 137. The left-hand panel is illustrated in color in the same volume on p. 107.