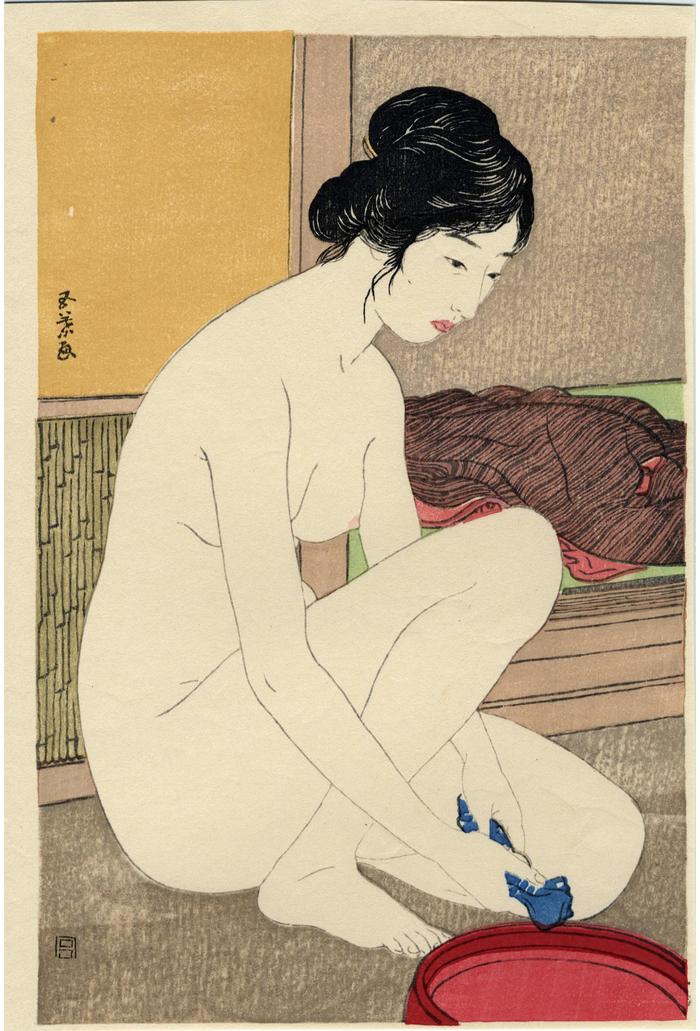 Originally published 1915, this example is not from original blocks and was pulled around 1950s. In the original printing the date seal corresponding to 1915 is seen just to the right of the signature, but not in this example.

Merritt wrote in her Modern Japanese Woodblock Prints: The Early Years (pp. 44-46): Goyō had studied yōga but had attracted Watanabe's attention with a prize-winning ukiyo-e-style poster and with an article on Utamaro in an art magazine. Watanabe asked Goyō to make a design from which prints could be produced. Goyō accepted Watanabe's invitation and drew a nude stooping by a round tub and wringing water from a small towel. In October 1915, in collaboration with Goyō, and under Watanabe's supervision, the carver Takan Shichinosuke made the numerous blocks which were required for the print. An artisan printer then printed he blocks to produce Bathing (Yuami). To Watanabe this shin-hanga was his dream come true."

Donald Jenkins, in his essay in The New Wave, the book about the Robert O. Muller collection, wrote on page 20: "Nineteen-fifteen... is generally conceded to be an important one in the history of modern Japanese prints. It was in that year that Watanabe Shōzaburō commissioned Goyō to design his Nude after the bath, and in so doing set out on the path that would soon make him the leading advocate of shin hanga - a term that, incidentally, Watanabe himself coined."

1) in a full-page color reproduction in Ukiyo-e to Shin Hanga: The Art of Japanese Woodblock Prints in a chapter by Haruo Matsuoka, p. 216.

2) in Ukiyoe Museums in Japan (Nihon no ukiyoe bijutsukan - 日本の浮世絵美術館), vol. 3, p. 47. Their example is from the collection of the National Museum of Modern Art, Tokyo.