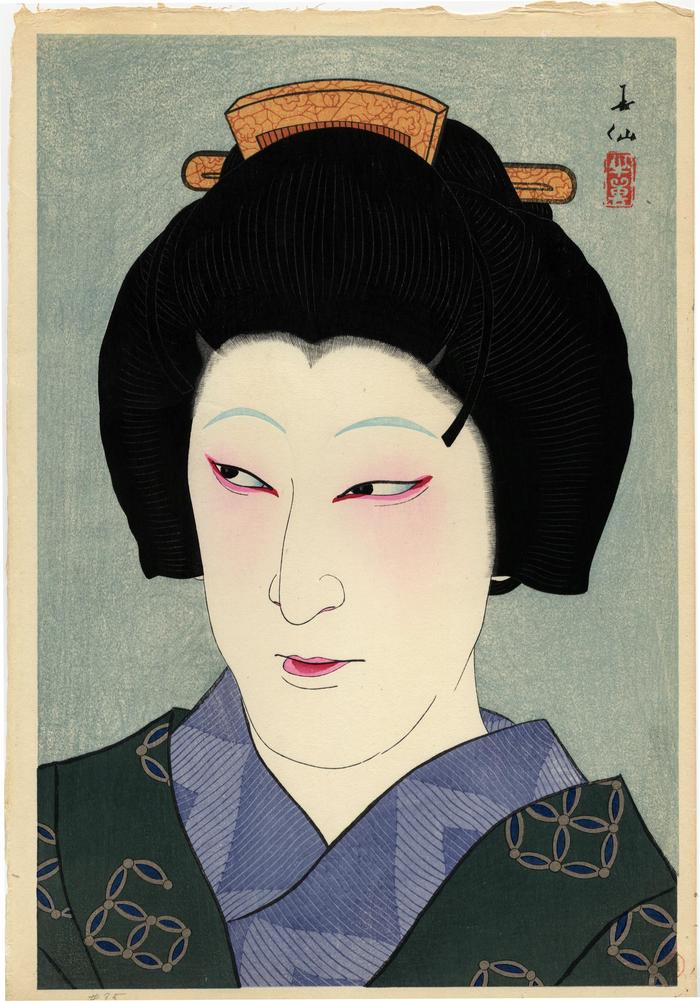 "Shunsen's image from the Love suicides on the eve of the Kōshin Festival shows Nakamura Kaisha I [中村魁車] as Okaru [おかる]. Okaru treats Hanbei [her brother-in-law] with hostility, believing him to have divorced her sister Ochiya. While Okaru is not one of the drama's main characters, she embodies the unwarranted doubt cast on Hanbei's samurai morality."

Quoted from: Stars of the Tokyo Stage, p. 120. It is from the series Portriats of Male Actors in Various Roles (創作版画 春仙似顔集).

Shinjū yoi Gōshin (心中宵庚申) was written by Chikamatsu Monzaemon (近松門左衛門) in 1722 for the puppet theater or ningyō-jōruri (人形浄瑠璃) and had its premier at the Takemoto-za in Osaka that same year. It was the 24th and last play based on a real event, a double suicide or shinjū (心中). This was a genre created by Chikamatsu himself.

The actual double suicide took place about two weeks before Chikamatsu wrote this play. On the 5th day of the 4th month, on the eve of the celebration of the kōshin, i.e. the yoi-gōshin, Hanbei (半兵衛), a green grocer, and his wife Ochiyo (お千代), committed suicide near the sanctuary of Ikutama (生国魂神社) in Osaka.

Hanbei had been born into a samurai family, but had been adopted by a merchant. After visiting the home of his birth father he returned to find out that his wife Ochiyo had refused to submit to the will of her evil mother-in-law and had moved to the house of his brother. Okaru is the older sister of Ochiyo. Hanbei repudiated her actions, but secretly plotted their double suicide. He was torn between his honor as the son of a samurai and his love of his wife. This for him/them seemed the only way out.

This play was not initially a success, because it was competing with another play at another theater composed at the same time by a rival of Chikamatsu, Ki no Kaion (紀海音). The two plays represented different aspects of theatrical approaches and Ki's was the more successful. And yet Chikamatsu's play survives to this day.

In the puppet theater the character of Okaru was portrayed by a type of puppet called a waru babā. "Head type for villainous women puppets. This “evil old lady” has no movable features and is noted for her coarse, drooping, concave eyes and jutting chin. It is less hateful-looking than comic and is used for such women as Omasa in Gotaiheiki Shiroishi Banashi, Iemon's wife in Shinjū Yoi Gōshin, and Okaya in Akegarasu Yuki no Akebono, the latter two being women who mistreat their daughters-in-law."

A side note: Ochiya was very beautiful, but had not had a happy life. First she was married off to an evil man who died shortly after they were married. The she married another man, but within a year or so he had died, too. Her third husband was Hanbei, whom she loved. But no wonder, considering the circumstances of her life, she willingly was a partner in a double suicide. (JSV)

2. In a small black and white reproduction in Modern Japanese Prints by Dorothy Blair, #162.