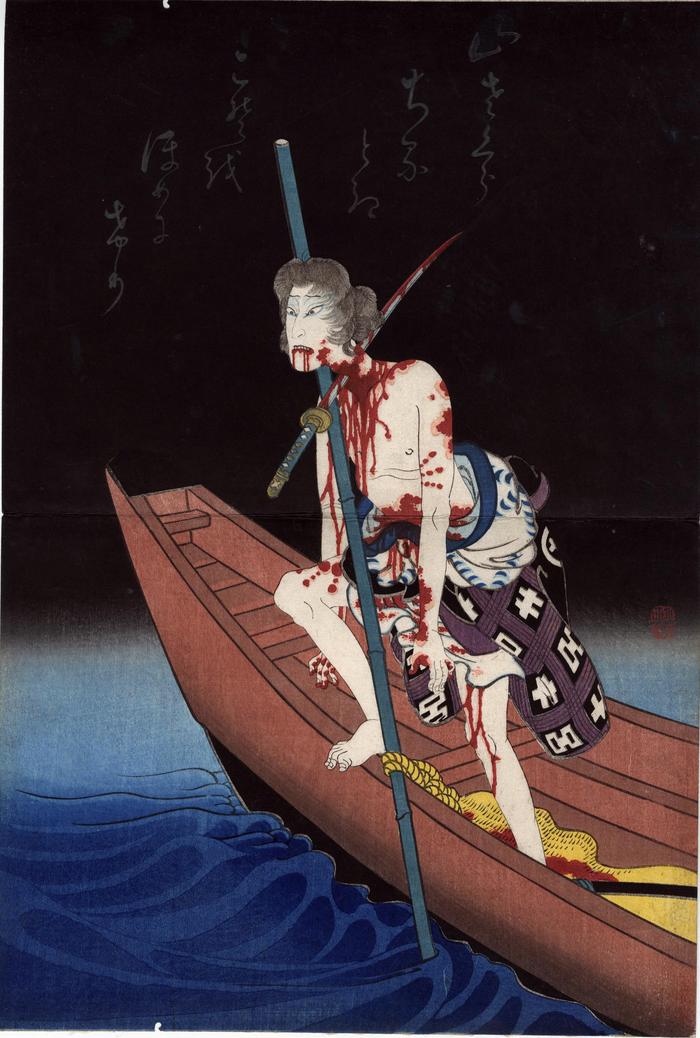 Ōkawa Hashizō (Onoe Kikugoro III) as Shirai Gonpachi, standing in ferry boat against black sky with wounds to his waist, sword through his neck, with bloodstains on his arm and leg; the suicide scene from the play 'Ume tabiji gojusan eki' (53 Stages of the Plum-tree Journey), 4/1848.

Ōkawa Hashizō I (aka Onoe Kikugorō III) appeared in Kamigata for only four brief seasons starting in 1820 and climaxing with this, his final appearance in 1848 as the villainous robber, Shirai Gompachi. Gompachi was escaping the Edo police in a row boat, when he was ambushed on the Sumida River. Realizing that 'the game was up', he committed a gruesomely violent suicide.

Onoe Kikugoro appeared in this gory role in a dance interlude Sangokuichi tsui no kuromono at the Kado za, Osaka, in the fifth month of 1848, the year before his own death.

The poem above printed in silver, translated by Eiko Kondo, in Kennedy Catalogue, 1984, #21:

The blossoms of the wild cherry are their own poets when they fall.
(A reference to Gompachi's suicide.)

See Roger Keyes' The Male Journey in Japanese Prints, Fine Arts Museums of San Francisco, 1989, catalog no. 225 for another impression.