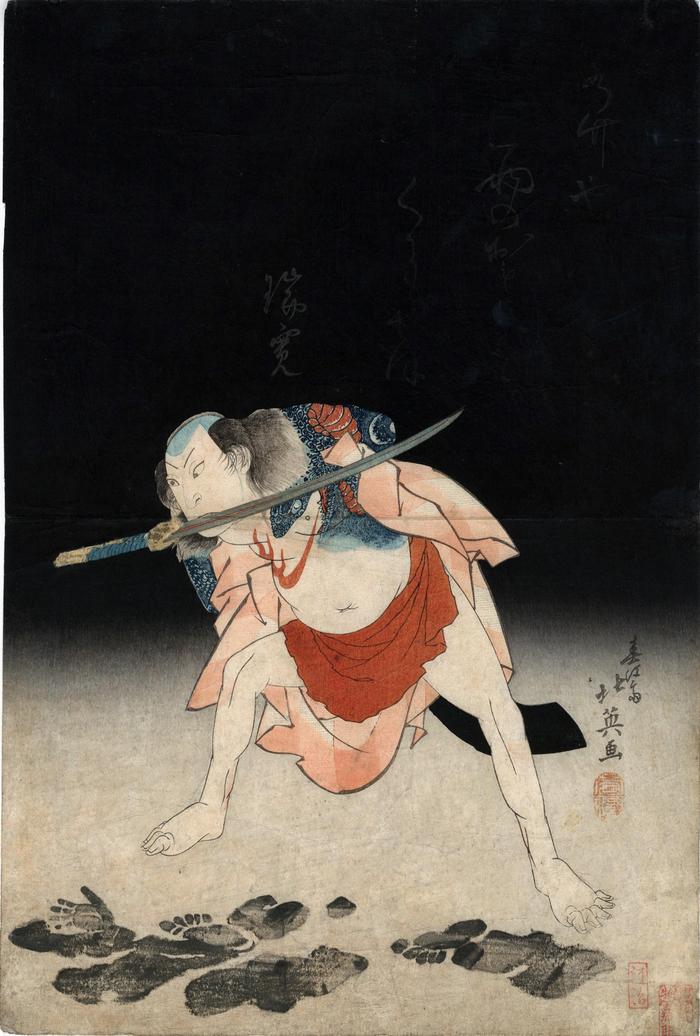 Arashi Rikan II as Danshichi Kurobei in the murder scene of the play Mirror of Naniwa: The Summer Festival (Natsu matsuri Naniwa kagami)

"Danshichi is an otokodate ("standing fellow" or "chivalrous commoner," a defender of the downtrodden) who had been imprisoned for wounding a retainer named Sagaemon. He is later paroled on the condition that he forswear violence. Soon, however, he must confront his wicked and corrupt father-in-law, Giheiji, whom Danshichi catches in a muddy backstreet attempting to take a fugitive courtesan named Kotura to sell to Sagaemon. Danshichi swore to protect her, for she is the lover of a friend, so he offers to buy her freedom from Giheiji. When Danshichi fails to produce immediate payment, however, Giheiji taunts him mercilessly, and although Danshichi does all he can to honor his pledge and control his anger, he finally becomes enraged beyond measure and slashes Giheiji with his sword while asking forgiveness for his transgression. Giheiji crawls away wounded and bleeding, and finally Danshichi finishes him off with a thrust through the villain's heart. Danshichi then quickly escapes by joining in a noisy festival procession.

The poem written in metallic pigment (a tin alloy partly worn off in this impression [i.e. the one illustrated in Impressions] against the black night sky is by Rikan II and uses the familiar conventional image of bamboo bending but not breaking as an intentionally ironic metaphor for the explosive Danshichi whose rage cracked his resolve:

The young bamboo
Is not burdened by
The heavy rain

The murder scene was a favorite with kabuki audiences who found the impressive movements of the solitary actor especially thrilling as he moved about the stage dressed only in a red loincloth and exhibiting the upper torso of a dashing otokodate with a vivid tattoo of a blue dragon breathing flames. In one production, Danshichi strikes thirteen "murderer's mie" (koroshi no mie). Hokuei's print boldly presents Danshichi's rage, as evil and murderer hang palpably in the black night air. While his evil adversary crawls away, Danshichi strikes a mie with his sword held in his clenched teeth as he crouches above Giheiji's muddy prints. Danshichi's posture is most expressive, as he spreads his legs wide and holds his arms behind his back while stalking Giheiji. It is a chilling moment of self-realization when Danshichi confronts an unfathomable personal darkness as witness to his own violence. As Danshichi looks past the left edge of the sheet, the viewer can only imagine what a pitiable and frightful sight the doomed Giheiji must offer. This is a composition stripped down to its essentials, and it is Hokuei's most dramatic use of the isolated figure gesturing beyond the edge of a composition. Rarely has violence been portrayed with such penetrating psychological insight in ukiyo-e prints, and this composition is one of the highlights of dramatic single-figure portraiture in the Osaka school."

Peter Ujilake wrote about a copy of this print: "The potency of this piece (which graces the cover of a major book by print scholar Roger Keyes) is due to many factors, but perhaps chief among them is the richness and density of the pitch black background, one of the hallmarks of Osaka printmaking."

See the Osaka Prints link about discussing an examination of the backside of this image.

Although it is barely visible in this image there is a text written in metallic ink in the dark area above the figure of Danshichi.See the cover of The Male Journey in Japanese Prints by Roger Keyes and the entry on pages 124-125 accompanied by a full-page, colored reproduction. The text in the Achenbach Foundation is legible.

This example is from the Mann Collection, Highland Park, Illinois.

3) in color in Ukiyoe Museums in Japan (Nihon no ukiyoe bijutsukan - 日本の浮世絵美術館), vol. 5, p. 146. This example is from the collection of the Ikeda Bunko Library.

4) in a small black and white reproduction in the Illustrated Catalogues of Tokyo National Museum: Ukiyo-e Prints (3), #3899.

8) in color on the cover of The Male Journey in Japanese Prints and in a full-page color reproduction on page 125, by Roger Keyes, University of California Press, 1989.

9) in color in ‘The beauty of cruelty. The origins of Danshichi and his evolution as a tattooed anti-hero in Natsu matsuri’ by John Fiorillo in Andon 87, December 2009, p. 33.