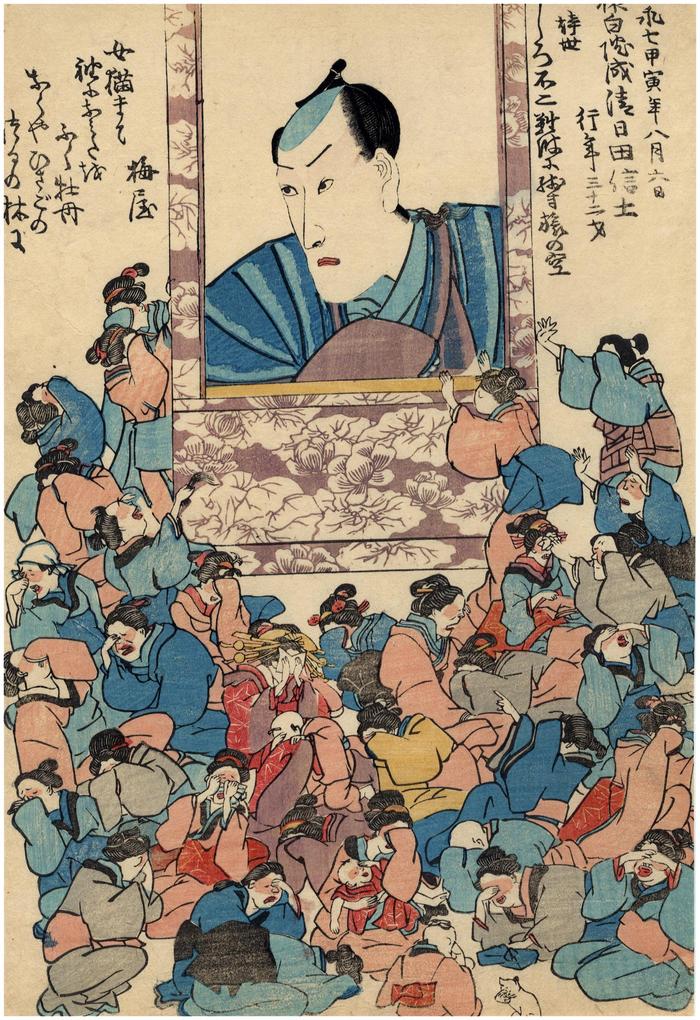 Like most shini-e or memorial prints this one is unsigned by the artist. Many scholars, collectors, dealers and museums have ascribed this print to Kuniyoshi. The weeping cat is one of the reasons many scholars believe this print my be by him. One site, Waseda University, says it is by Yoshimune, Kuniyoshi's pupil. Many sites online list this print as 'Artist unknown'. Therefore, until something absolute is found the attribution will be anyone's guess - even though stylistically it does look like a Kuniyoshi composition.

1) black and white in the section on Death and Dying in The Male Journey in Japanese Prints by Roger Keyes, p. 184. This example can be found in the Achenbach Foundation collection, San Francisco.

2) color reproduction in Japanese Popular Prints: from votive slips to playing cards by Rebecca Salter, p. 129. That copy is in the National Museum of Japanese History.

There is another copy of this print in the National Gallery, Prague.

The text in the upper right reads:

The next line reads:

Text on the other side says:

Even the cat is weeping

There is an interesting curiosity at the bottom of this print: a weeping cat. While this might not leap out at you as particularly significant and may only appear to be a 'nice' touch, it is surprisingly more important than at first glance. Why? Because the cat was popularly believed to have been the only animal that didn't weep over the death of the historic Buddha.

Robert Schaap has speculated that, despite the Japanese love of cats, the use of monstrous cats in their prints and in their folklore may have been a result of an extrapolation from the belief that cats did not mourn the death of the Buddha properly. That is why we have added two links above to compositions in the Lyon Collection that seem to support this hypothesis. One is an image of a fearsome cat monster and the other is a vertical diptych where every creature from humans to insects are gathered to honor the Buddha, but not the cat. There is a lion, a tiger and also two cat-like animals that are probably a white fox and another unidentifiable creature, but nothing quite like a domesticated house cat.
Ichikawa Danjūrō VIII (八代目市川団十郎: 3/1832 - 8/1854) (actor)
actor prints (yakusha-e - 役者絵) (genre)
shini-e (死絵) (genre)