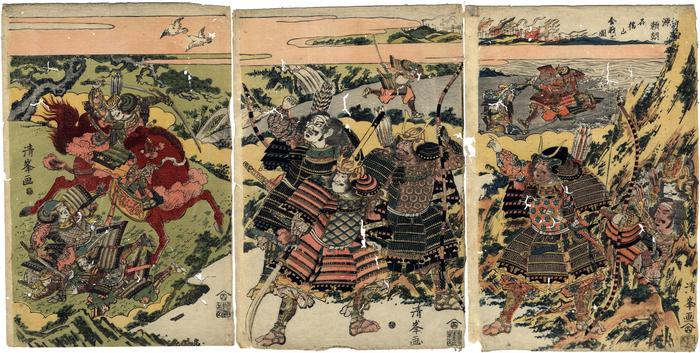 1810s
30 in x 15 in (Overall dimensions) Japanese color woodblock print
Signed: Kiyomine ga
清峯画
Publisher: Nishimuraya Yohachi
(Marks 391 - seal 23-016)
Censor's seal: kiwame
Musées Royaux d'Art et d'Histoire (via Ritsumeikan University) - the right-hand panel only William Deal in his Handbook to Life in Medieval and Early Modern Japan wrote on page 54: "Minamoto no Yoritomo (1147–1199) Ruled 1192–99 as ﬁrst Kamakura shogun. Yoritomo came to prominence as the commander of the Minamoto troops that defeated the powerful Taira family in the Gempei War (1180–85). With the victory, Yoritomo established the Kamakura shogunate, thereby inaugurating warrior rule of Japan that lasted until 1868. Yoritomo’s warrior government was headquartered in the city of Kamakura, and in 1192 Yoritomo was named shogun by the emperor. Yoritomo established a number of governmental ofﬁces including the samurai-dokoro, the kumonjo, and the monchujo to oversee governance of Japan. He ruled as shogun for seven years before dying of injuries sustained during a horse-riding accident in 1199."

Although there are no identifying cartouches naming the characters represented in this triptych we believe we can possible name two of them. One is one of the figures along the right-hand side of the right sheet. This is the one with the whiter looking face. He is wearing a helmet decorated with a front facing dragon. Perhaps this is Yoshitsune, Yoritomo's younger brother. We come to this conclusion because Yoshitsune is clearly identified in other works in the Lyon Collection by different artists wearing the same or a very similar helmet. See #685, a Toyokuni I triptych, as an example. Another is the Shuntei diptych, #890.