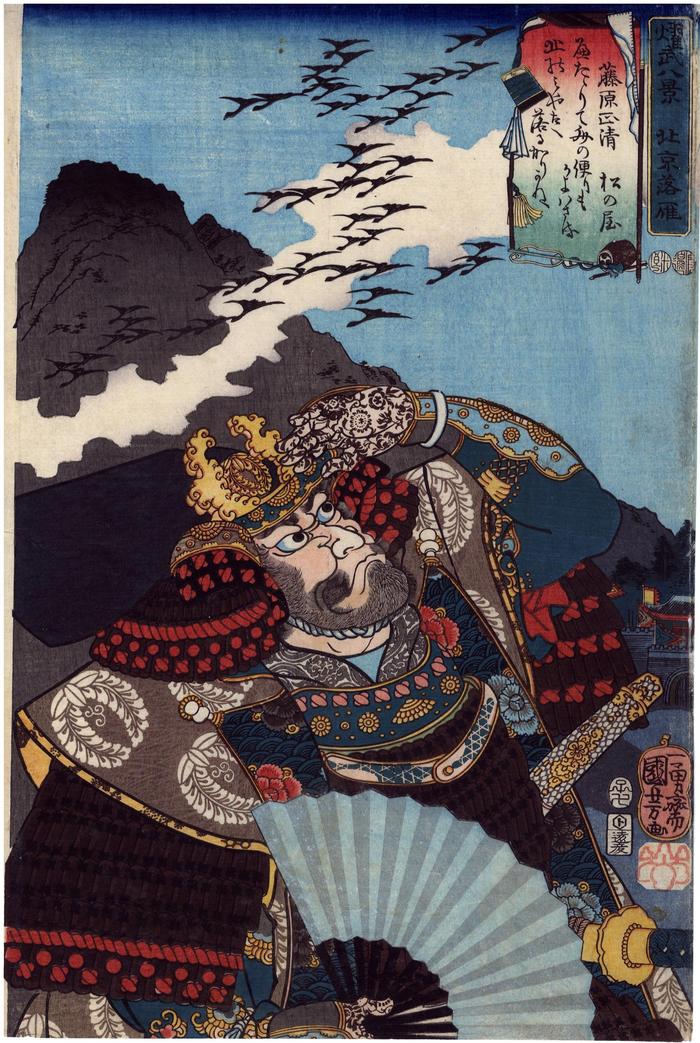 07/1852
9.75 in x 14.25 in (Overall dimensions) Japanese color woodblock print
Signed: Ichiyūsai Kuniyoshi ga
一勇斎国芳画
Artist's seal: kiri in red
Publisher: Enshūya Hikobei (Marks 055 - seal 21-016)
Censor seals: Mera and Watanabe
Date seal: 7/1852
Museum of Fine Arts, Boston
British Museum
Victoria and Albert Museum
Nationaal Museum van Wereldculturen (Rijksmuseum Volkenkunde, Leiden) via Ritsumeikan University The large cartouche in the upper right identifies each of the figures in this series. That cartouche and its warrior related border decoration is the same in each of these prints. They include a piece of armor, a drum, a war banner and a war fan. There are four other prints from this series in the Lyon Collection. See #s 364 (Akushichibyōe Kagekiyo), 365 (Inagawa Yoshioto), 923 (Eda Genzō) and 926 (Suzuki Shigeyuki).

"The Japanese general Katō Kiyomasa (1562-1611), here depicted during his Korean campaign of 1592, pines for home as he watches a flock of geese in flight. In that it was forbidden to depict historical figures from the late 16th century, that of Kiyomasa is disguised a Masakiyo of the aristocratic Fujiwara family. A knowing public, though, would have understood the actual identity of the character. This illustration relates to Homing geese at the Northern capital from the Eight views."

Quoted from: Heroes and Ghosts: Japanese Prints by Kuniyoshi 1797-1861 by Robert Schaap, p. 108, with a color reproduction.

Schaap adds: "The second state of this print is recognisable by the ōgi ('folding fan') which is not shaded in the folded segments." (Ibid.)

The British Museum web site says of this print that it is "Pekin rakugan 北京落雁 (Homing Geese at the Northern Capital)". Beijing or Peking in China is written as 北京 or Northern Capital. They point out that "...Fujiwara no Masakiyo (the historical Kato Kiyomasa) [is] watching geese flying over a Chinese town against a mountain background."