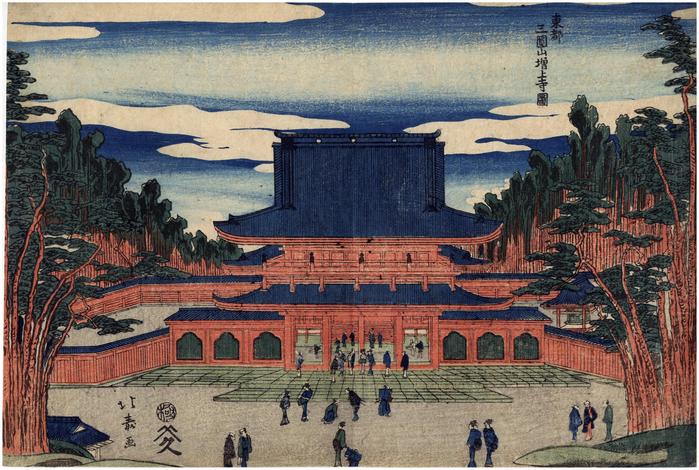 The British Museum date their copy to 1830 and it was published by Nishimuraya.

The newly rebuilt Zojo-ji was destroyed mostly during World War II. It can be found in the Roppongi district of Tokyo. Originally it was the main temple that served the ruling Tokugawa clan. It was a huge complex which housed 3,000 priests and novices and had 48 sub-temples and 150 seminaries. It was one of the most important Buddhist temples in Japan.

"Zojo-ji was moved to what is now Shiba-koen in 1598, where it was the centerpiece of a vast temple city. Razed and rebuilt more than once, the temple has had a tumultuous history. After being torched during the Meiji Restoration, it was burned by a vagrant in 1909 before being destroyed during World War II. The sanmon (two-storied) gate, built in 1605, is a miraculous and magnificent survivor. One of the very few buildings of such antiquity in Tokyo, it is designated an Important Cultural Property."