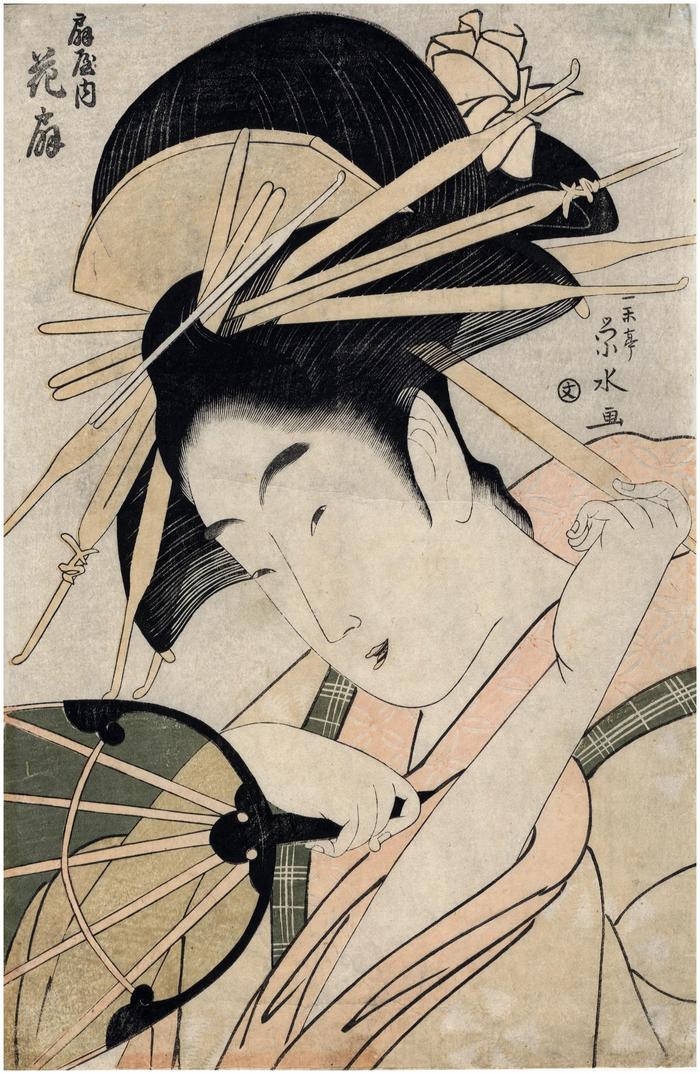 The curatorial files at the Metropolitan Museum of Art says: "The courtesan Hanaōgi fiddles with one of the hairpins holding her magnificent coiffure in place. She grasps a semitransparent circular fan that recalls her brothel’s name, Ōgiya, literally “House of Fans.” Hanaōgi was a name used by a succession of high-ranking courtesans of this house. This image is in all likelihood meant to represent Hanaōgi VI, who was known to be talented in poetry, singing, and other literary arts."

This would seem reasonable except for the fact that there is an Eisui print of Somenosuke of the Matsubaya where she is holding a sheer greenish fan that is almost exactly the same one as Hanaōgi, with slight differences.

Bust portrait of the Oiran Hanaogi from the Hanaogi house. In her right hand she is holding a transparent fan. The Museum of Fine Arts in Boston dates this image to ca. 1796-98.

Sadly, there are few remaining records of Eisui’s career. He was a pupil of Hosoda Eishi (1756-1829), clearly echoing the master’s style depicting beautiful women [bijin-ga]. Eisui is particularly remembered for for his bust portrait (ōkubi-e) series of famous courtesans of the day. Eisui’s Beauties of the 5 Festivals [Bijin gosekku] of the later 1790s is very similar in format to this print’s untitled series of courtesan close-ups of select brothels’ celebrities. These beautiful women are depicted holding a variety of feminine items, such as the transparent round-fan seen here, that also serve to demonstrate the skill of the printmaking artisans.

We know that there were quite a few women who were honored by being allowed to use the name Hanaōgi. There is an artwork of a courtesan named Takao by Okumura Masanobu from the first decades of the 18th century with an inscription composed supposedly by a tayū named Hanaōgi. Ōgiya Uemon or Bokuga, the owner of the Ōgiya house that employed Hanaōgi may have been the impetus behind this print by Masanobu as a kind of advertising ploy.

The Hanaōgi of this print may have been a fashion trend setter. Amy Kohlen in her master's thesis at University of Arizona in 1976 noted: "...the latest style, knotted and shaped at the back of her head to resemble a butterfly, a type of coiffure popularized by Hanaogi who belonged to the Ogi house in the Yoshiwara." Our Hanaōgi is not wearing that style here.

The name Hanaōgi means 'flower fan'. While Hanaōgi was highly regarded she wasn't even the most important oiran of the Ōgiya. That position was held by Takigawa who was allotted three rooms while Hanaōgi was only given one.