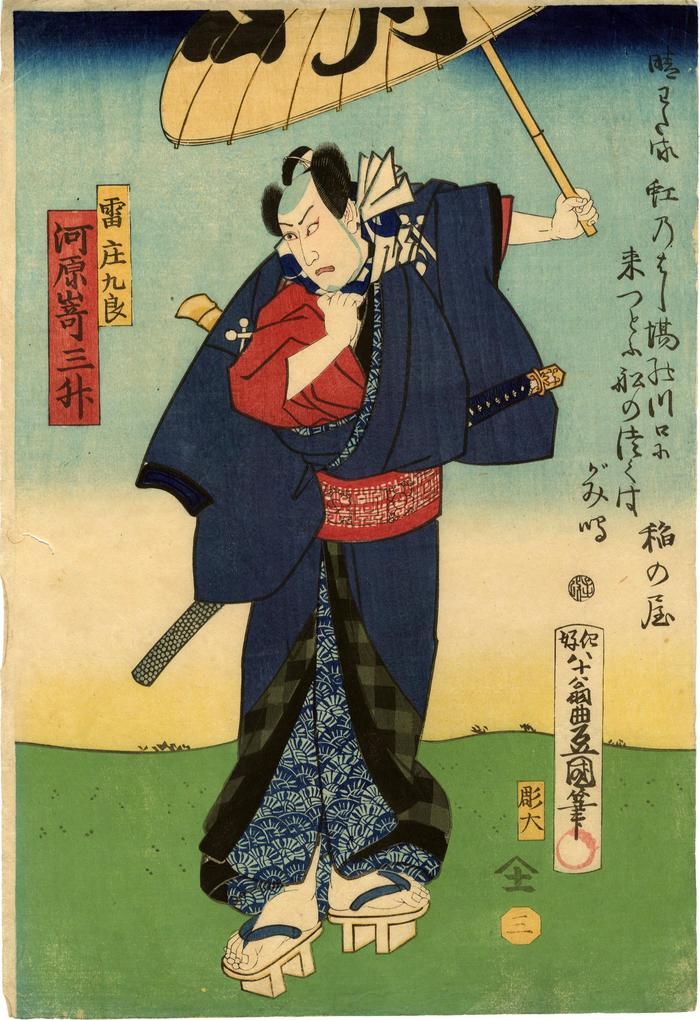 "Act II closes with a glorious “presentation” of the five gallantly dressed men, who stand under blossoming trees on the bank of the Inase River, holding umbrellas on which is written “shiranami.” Each man delivers a brief self-introduction, before starting to fight a troop of policemen."

Elsewhere Sasaguchi wrote: "Shira-nami, meaning white waves, is the Japanese reading of two Chinese characters bai-bo. After the Chronicle of the Latter Han Dynasty (25-220) gave the label “baibo” to a group of bandits living in the Baibo Gorge, Shanxi Province, the term came to be used for men who made their living by theft or extortion. In this sense it was transferred to Japan."

Kawarazaki Gonjūrō I did not take the Sanshō name until September 1873. However, Sanshō was one of his poetry names. Perhaps that explains the name of the figure holding the umbrella in this print from 1864. Maybe the poem along the right side is his.

The otokodate frequently carried shakuhachi flutes both for playing and to as symbols of their authority because they often used them as weapons. In this image the 'puppet' is carrying it on his back and can be seen partially poking out near his right shoulder. (JSV)
actor prints (yakusha-e - 役者絵) (genre)
Kawarazaki Gonjūrō I (初代河原崎権十郎: 9/1852 to 2/1869) (actor)
Otokodate - chivalrous men (男伊達) (genre)
Shiranami Gonin Otoko (白浪五人男) (kabuki)