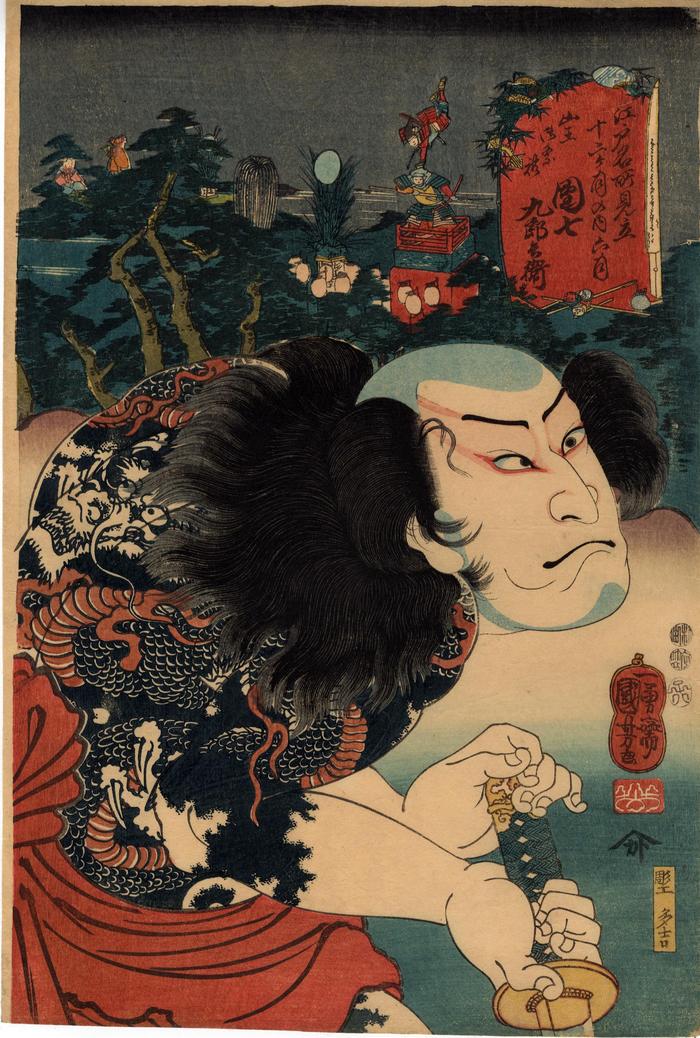 A real-life slaying in 1698 might have been the wellspring of Danshichi mono (plays about Danshichi), including Zôho Naniwa kagami (Expanded mirror of Osaka). A later murder by a Sakai fishmonger on an Osaka backstreet in 1744 seems to have inspired the celebrated murder scene in the best-known dramatization of the story: Mirror of the Summer Festival in Osaka (Natsu matsuri Naniwa kagami), with performances spanning more than 250 years, continuing unabated today. The first kabuki performance of a Danshichi role took place in 11/1698 in Yadonashi Danshichi (Homeless Danshichi), when the Kyoto-born actor and former professional samisen player Kataoka Nizaemon I (1656-1715), founder of the Kataoka lineage of actors, played Danshichi at the Shioya Kurôemon no Shibai, Osaka. Two years later, in 11/1701, Nizaemon organized a kaomise (face showing or ceremonial opening of the theatre season), with a performance of Yadonashi Danshichi shichinenki (Seventh Death Anniversary, Homeless Danshichi). After Nizaemon’s two performances, the role of Danshichi was established and ripe for transformation in a variety of adaptations.

The scene depicted here is one of kabuki's most famous episodes, the Nagamachi noura no ba (Back Street Scene in Nagamachi). Danshichi has promised to pay 30 ryô (gold coins) to his father-in-law, Giheiji to ransom a friend's lover, the courtesan Kotoura whom Giheiji has kidnapped. Not having the money after Kotoura's release, he hands Giheiji stones wrapped in a cloth. When Giheiji discovers he has been duped, he insults Danshichi mercilessly and strikes him with a sandal, cutting Danshichi’s forehead. As their argument escalates, sounds of revelry can be heard from an approaching Kozū Shrine Festival parade in Dôtonbori, its boisterous music providing an incongruous carnivalesque accompaniment to the action in the gloomy backstreet. Danshichi draws his sword, accidentally cutting Giheiji, who screams, "Murderer!" Overcome with rage, Danshichi, his unknotted hair falling to his shoulders, strips down to a red loincloth, revealing his tattooed body. As he moves in on his prey, Danshichi performs a series of koroshi no mie (murderer's poses) in counterpoint to Giheiji’s displays of panic and supplication. Finally, after asking for forgiveness, Danshichi takes the old man's life with a thrust of his sword. Danshichi then washes splattered blood and Giheiji’s muddy hand prints from his body, using water from a nearby well. He escapes by mingling with the large crowd of festival celebrants.

Utaemon IV, a superstar in Osaka, spent several periods performing in Edo, including 2/1838-12/1849. Another impression (from the famed B.W. Robinson collection) is illustrated in Schaap: Heroes & Ghosts: Japanese Prints by Kuniyoshi, 1797-1861, no. 179, where the play is misidentified as Yadonashi Danshichi shigure no karakasa. However, the role for that play should be Danshichi Mohei, whereas Danshichi Kurobei is written on Kuniyoshi's print.

The sword on the right side of the title cartouche alludes to the heirloom sword named "Niji Yoshimitsu." An earlier uchiwa-e (fan picture) portrait by Gountei Sadahide in 1831 depicts Utaemon IV (under his former name, Shikan II) in a similar pose.

This is arguably the best design from the series Edo meisho mitate jûnikagetsu no uchi (Analogue series of famous places in Edo during the twelve months) and one of Kuniyoshi's (1797-1861) most impressive actor portraits. The zooming in on Utaemon IV in mie (climactic display) captures the tension-filled atmosphere of the celebrated murder scene.

This information was taken from John Fiorillo.