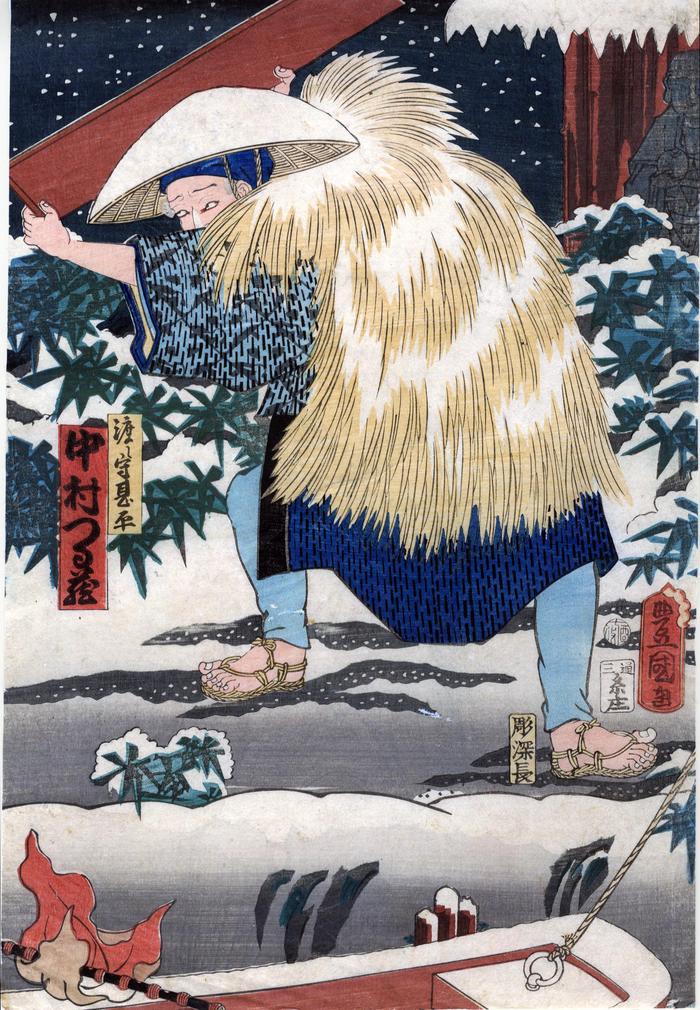 The name Jinbei is sometimes spelled as Jinpei.

Jinbei is a minor character, a ferryman or watashimori (渡し守), who risks his own life to help a friend who had been wronged. Helping his friend is forbidden by the authorities, but his loyalties are too deep. He is a good guy who many of the audience goers would have been rooting for.

Above are a few links to other representations of Jinbei to help you better to understand this singular print seen out of context.

We resolved what Jinbei is doing with that board in his hand after finding another print by Toyokuni III at Ritsumeikan University. Click on that link above and you will see Jinbei trying to protect his old friend from an attacker.

Kabuki 21 wrote: " "Higashiyama Sakura Zôshi" was premiered in the 8th lunar month of 1851 August at the Nakamuraza [casting]. The true incident on which the play was based occurred in 1653 (the direct appeal). When it was dramatized, the names and details, even the era (Muromachi instead of Edo), were changed because of censorship by the shogunate government. For example, the head of the village Kiuchi Sôgo, the evil lord Hotta Masanobu and the shôgun Tokugawa Ietsuna became Asakura Tôgo, Orikoshi Masatomo and Ashikaga Yoshimasa in the drama. Segawa Jokô III mixed in his drama the farmers riot and elements taken from Ryûtei Tanehiko's popular novel "Nise murasaki Inaka Genji" (commonly called "Inaka Genji"). This drama was revised by the playwright Kawatake Shinshichi II. He got rid in his version of the "Inaka Genji" elements. It was staged in the 8th lunar month of 1861 at the Moritaza [casting] under the title "Sakura Sôshi Gonichi no Bundan". The drama was revised during the Meiji era and the real names of the main protagonists were used instead of the names created by Segawa Jokô III."