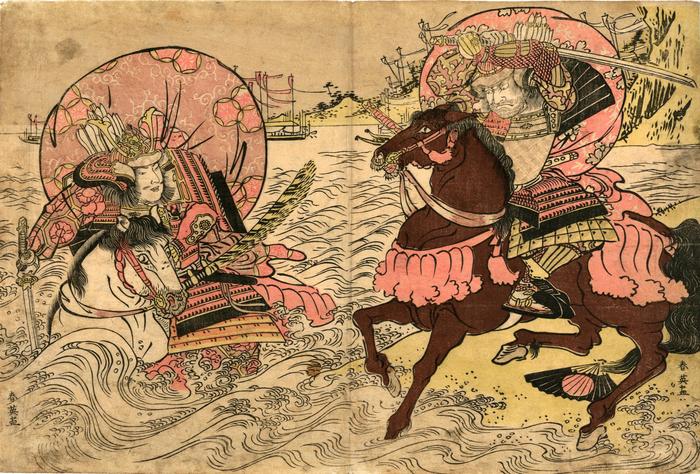 The Taira and the Minamoto clans engaged forces at the Battle of Ichinotani. The Taira were routed and fled in their boats. Atsumori, seeing that he was being left behind, entered the water on his horse in an effort to catch up, but Kumagi saw him from the shore and issued a challenge for single one-on-one combat. Kumagi eventually won and beheaded his young opponent.

Both combatants are wearing a horo (母衣), a large, billowy-looking attachment at their backs meant to take the blows of arrows and thereby to keep them, to some degree, somewhat safer.

One argument against the figure in the water being Atsumori is the mustache. On nearly all other images of this character the young warrior shows no facial hair. So, if it isn't Atsumori then who is it?
warrior prints (musha-e - 武者絵) (genre)
Kumagai Jirō Naozane (熊谷直実) (role)