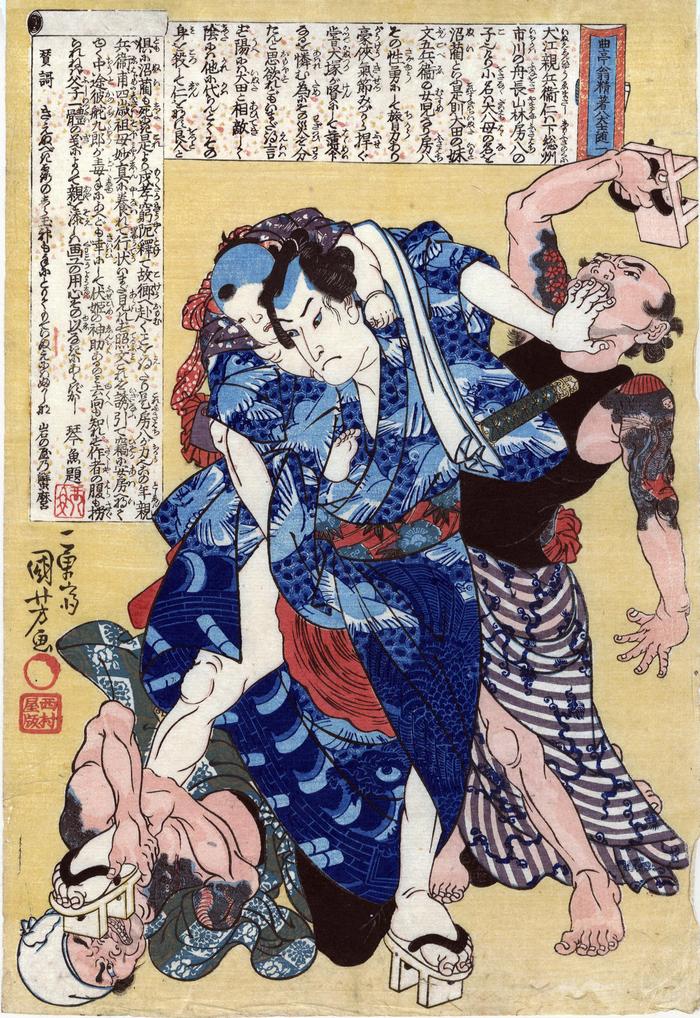 The quality of the printing of this piece would indicate that it is from an early edition. (Compare, for example, the copy in the Museums of Scotland, found in the link above.) The details of the tattoo of the man who is being throttled by Yasuyori with his right hand, the man who has raised a geta into the air in an effort to strike our main protagonist, the greatest insult of all, that man's tattoo on his left arm appears to show a woman, perhaps a courtesan, walking beneath an umbrella being held over her. The shoulder of his right arm is decorated with flowers against a dark ground. But most striking element of all is the hero's robes showing birds in flight in the upper part and a shachi (鯱), a fantastic dolphin-like creature, that was often used as an elaborate rooftop adornment. These creatures, occasionally gilded, were placed on the rooftops of Nagoya and Okayama castle. Clearly that is what is being portrayed here. Use the enlarging tool to see this more distinctly.

"In Chapter 74 of Hakkenden, one of the heroes, Inuta Kobungo 犬田小文吾, outwrestles a violent bull, calms it down, and thus comes to the help of local villagers, who gratefully shower him with praise and admiration. A wealthy bull owner, Supotarō 清本太郎, invites him to stay overnight at his house." The master of the house serves him wine personally and the next day asks him to rest in a room set aside to honor people who have done a service to the village.

Later "The same passage has another example, in which Supotaro gives presents to Kobungo. Servants bring in several rolls of crinkled hemp cloth and a large quantity of coins. They say that, now that the weather is hot, the crinkled hemp will be useful on his travels. Also, Kobungo's feat is worth many coins because the bull that he subdued is notoriously violent. Kobungo responds, 'You didn't have to go to all this trouble..." Kobungo said this because it should be nothing for a samurai to wrestle a violent bull.