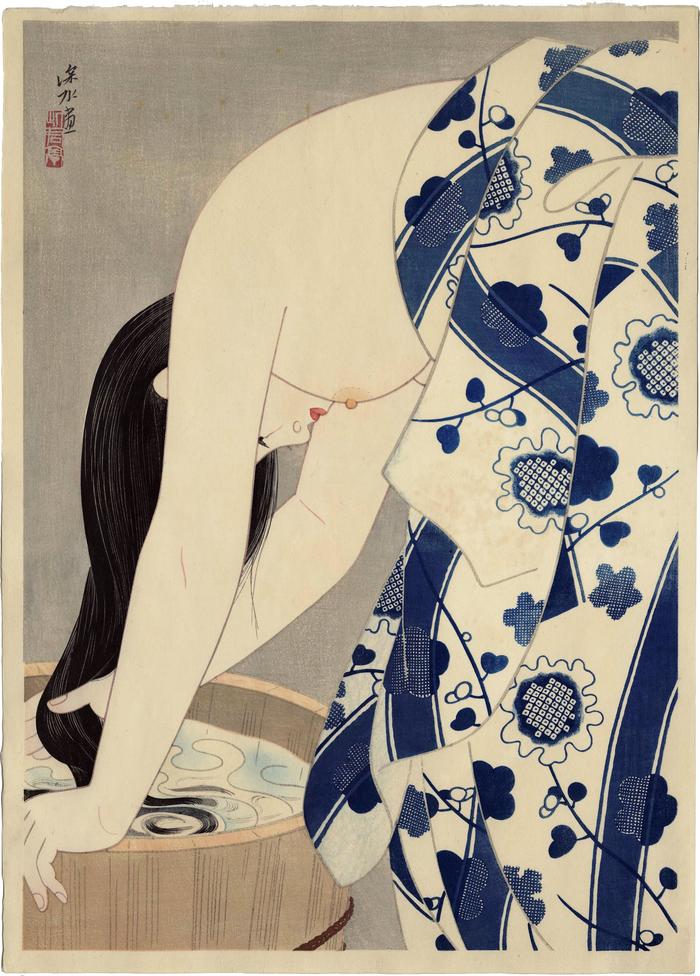 In The Women of Shin Hanga... it says of the print in their catalogue on page 240: "Shinsui designed this print to mark his designation by the Ministry of Education, Culture, Sports, Science, and Technology as a Preserver of Intangible Cultural Properties (Jūyō Mukei Bunkazai Hojisha), a status defined in the 1950 Law for the Protection of Cultural Properties (Bunkazai Hogōhō). Artists awarded this distinction are now referred to as "living national treasures" (ningen kokuhō). The canonical subject of this print appropriately commemorates the honor in that depictions of women washing their hair over large wooden tubs were common in both Tokugawa- and Meiji-period ukiyo-e. Nineteenth-century photographers serving Japan's burgeoning tourist market also included this subject in their inventories. The specific prototype for this print was a two-fold byōbu (folding screen) Shinsui painted in 1949 titled Black Hair (Kuro Kami).

The contours of the woman's garment and the lines of the fabric's design echo the curves of the woman's body and lead the eye to her face and breast, whose red and pink colors contrast with the blue and gray tonality of the print in general. But while the subject of this print maybe traditional, Shinsui's design looks forward in interesting and important ways. The geometry of the fabric pattern flattens out the right half of the image, pushing it up against the picture plane in an abstracted manner."

They added later: "This extremely large print with a mica ground required thirty-nine blocks. It was carved by Maeda Kentarō (born 1891) and printed by Ono Gintarō (active 1917-53)."

Published by the Commission for Protection of Cultural Properties, no. 158 (Zaidan hōjin Bunzaki Kyokai hakkō

3) In full-page color in The Women of Shin Hanga: The Judith and Joseph Barker Collection of Japanese Prints, edited by Allen Hockley, Hood Museum of Art, p. 241.

There may be another copy of this print in the Museum of Modern Art in Tokyo, but the dates of release in the early 1950s vary slightly.
beautiful women (bijin-ga - 美人画) (genre)
modern prints (shin hanga - 新版画) (genre)