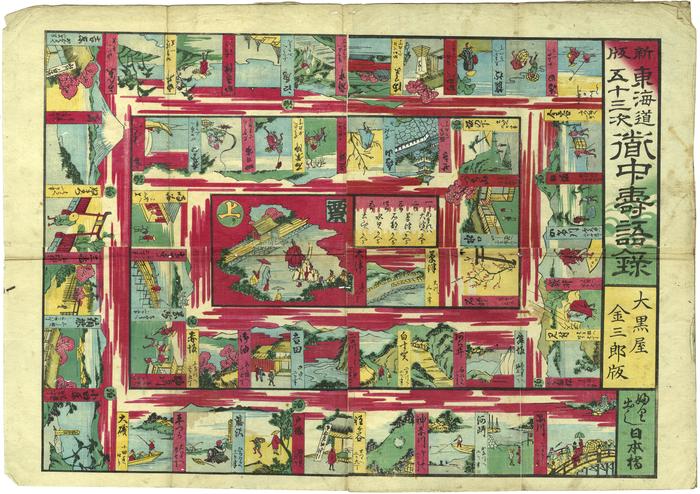 The goal of this Tokaido sugoroku is to reach the final destination of the Western Capital (Kyoto), which is located in the center of the print. Every player starts at Nihonbashi 日本橋 ("Japan Bridge," the original downtown center of old Edo, now Tokyo), the green square located at the lower right corner. Each player rolls a dice and moves along the board according to the number rolled. If you land at a station with a green circle with 泊 character (means overnight stay), you have to skip your next turn. The penultimate station with tricolor (red/white/yello) ikat-like pattern is the final challenge - if you roll a one, you win - otherwise, you have to go back to the station indicated by the dice.

The board is composed of four oban size woodblock prints, trimmed and pasted together to make a single sheet.

Picture Sugoroku 絵双六 was first seen in Japan around the 13th Century but became extremely popular during the Edo period due to inexpensive but elaborate woodblock printmaking. Similar to chutes and ladders games, Sugoroku continued to be popular throughout the Meiji and later periods. Children's magazines frequently included sugoroku as inserts.

The original Tōkaidō was established by the Kamakura bakufu (1192-1333) to run from Kamakura to the imperial capital of Kyoto.

The publisher of this game print, Daikokuya Kinzaburō, operated from ca. 1863-1881. Based on the use of what appears to be aniline red we can date this print as no earlier than ca. 1868 or so.