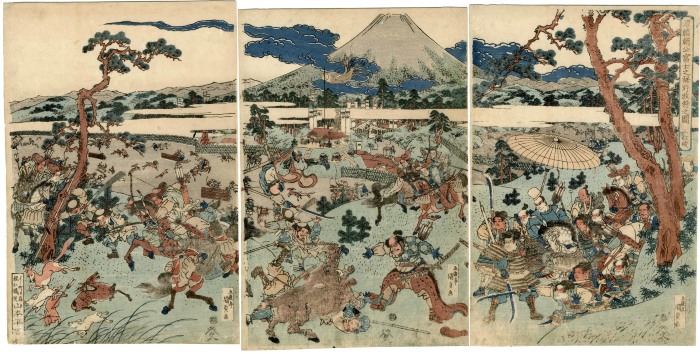 ca 1814
31.5 in x 15.5 in (Overall dimensions) Japanese color woodblock print
Signed: Gototei Kunisada ga
五渡亭国貞画
Publisher: Yamamotoya Heikichi
Marks 595 - seal 04-007
Censor seal: kiwame
Waseda University Library
Museum of Fine Arts, Boston
Museum of Fine Arts, Boston - 19th c. tsuba showing same encounter
Worcester Art Museum "In 1193, when the great warrior Yoritomo gave a hunting party at the foot of Mount Fuji, a boar suddenly broke cover and,wounded and maddened, headed straight at the hunters, too fast to be hit with their arrows. In an instant the warrior Nitan-no-Shiro Yadatsune sprang from Yoritomo's bodyguard and, casting aside his bow and arrows, and leaping on his horse, he made straight for the boar, which turned to attack him. Like a flash Nitan leaped on the back of the beast, with his own back to the animal's head. Grasping the tail, Nitan clung to the speeding animal until he found a chance to draw his dagger and stab him to death. Thereupon, so it is said, he received an ovation "so great as to shake the surrounding hills." "

Quoted from: The Asian Animal Zodiac by Ruth Q. Sun.

Yoritomo appears on the back of a dappled horse in the right-hand panel. He is protected by both a crowd of warriors, but also by the large yellow umbrella. In the middle panel Nitan-no-Shirō Yadatsune is about to take on the boar.

If you use the enlarging tool you will see that in the middle ground of center and left-hand panels there is a fenced off field that is used as a hunting arena where archers are going after deer, foxes and other animals.