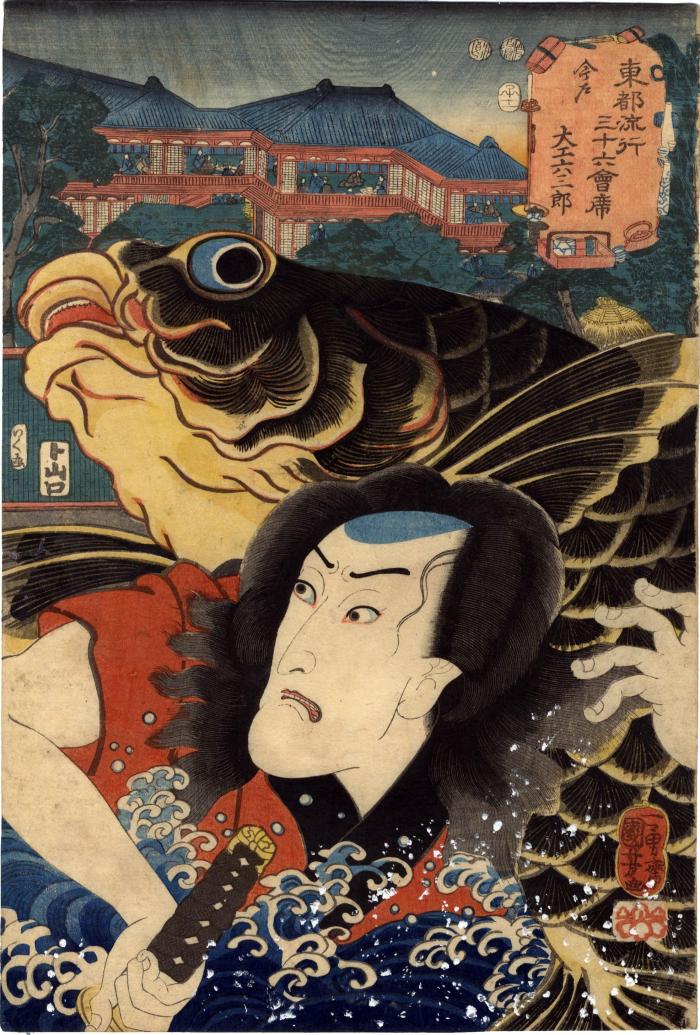 This print was used for the cover of Timothy Clark's book Kuniyoshi.

"Although the name of the actor is not given on this print - probably due to the lingering influence of the Tenpō reforms of the early 1840s - it is nevertheless identifiable as a posthumous half-length portrait of the actor Onoe Kikugorō III (1784-1849) in the role of the carpenter Rokusaburō. Originally called Onoe Matsusuke II, this actor assumed the name Kikugorō III in 1815 and was one of kabuki's most versatile performers, receiving the accolade of kaner yakusha ('all-around actor). Kunisada executed an earlier portrait of him in the same role in the series Ōatari kyōgen no uchi (Great stage hits).

Rokusaburō is the main character in the kabuki play Mijikayo ukina no chirashigaki. The scene depicted in this print is called 'catching the carp' (koi tsukami) a type of mizu kyōgen - a play in which water was actually used on stage - belonging to the broader category of summer plays (natsu kyōgen. 'Catching the carp' was a favorite event: water from a large tank is utilised when fights with a carp or the appearance of a fish's spirit are staged."

Quoted from: Heroes and Ghosts: Japanese Prints by Kuniyoshi 1797-1861 by Robert Schaap, p. 171. There is also a large color illustration on this page.

Osakaprints.com gave a cogent summary of this scene based on a different play on this same topic: "The play was an adaptation of one of the most notorious double suicide stories (shinjû-mono), this one involving the carpenter Rokusaburô and the courtesan Osono, inspired by an actual event in 1749. (The Osaka citizenry was shocked by yet another death on the same day, when a prostitute was executed for murdering Osono's brother.) The popular theatrical retelling also involves the theft of a precious scroll painting of a carp (koi). When Rokusaburô tracks down the thieves and wrestles the scroll away from them, the carp comes to life and escapes. Shigeharu's print shows him trying to capture the carp, a scene called koi no tsukamimono ("catching hold of the carp"). The play was performed in the summer, and real water was used on the stage (called mizuiri or "in the water")."
Yamaguchiya Tōbei (山口屋藤兵衛) (publisher)
actor prints (yakusha-e - 役者絵) (genre)
Onoe Kikugorō III (三代目尾上菊五郎: 11/1815-3/1848) (actor)