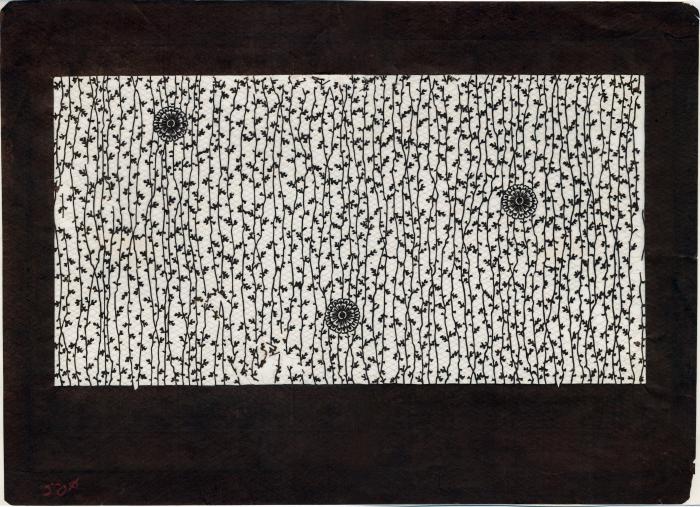 
In the late 19th century, a huge number of Japanese katagami, a traditional type of stencil used for dyeing cloth, were exported to the West along with ukiyo-e prints, leading to the rise of Japonism.

If you use the tool provided to enlarge this image (enormously) you will see that this incredibly delicate pattern is supported by a network of silk threads. Some areas even show where these threads have been distorted or broken, as would be usual in such use.

In the glossary of Carved Paper: The Art of the Japanese Stencil from an exhibition at the Santa Barbara Museum of Art in 1998 it states:

silk web reinforcement (itoire), lit. "thread insertion:
Method of reinforcing a stencil by
constructing a web of fine silk on
a wooden frame and then gluing
the two previously separated lay-
ers on stencil paper on either side
of this web with persimmon tan-
nin. After the silk is sandwiched
between the two stencil sheets,
the web is cut free from the
frame. Silk webbing was largely
replaced by guaze reinforcement
(shabari) in the 1920s.

In another entry it describes another particular technique:

sewn reinforcement (itokake, lit. "thread suspension"
Method of reinforcing a stencil by
sewing silk thread through the
paper. This technique was used in
place of silk webbing (itoire) as
well as combination with it to
hold floating elements in place,
like the dots in the center of
konoko spots. Also called itotsuri.