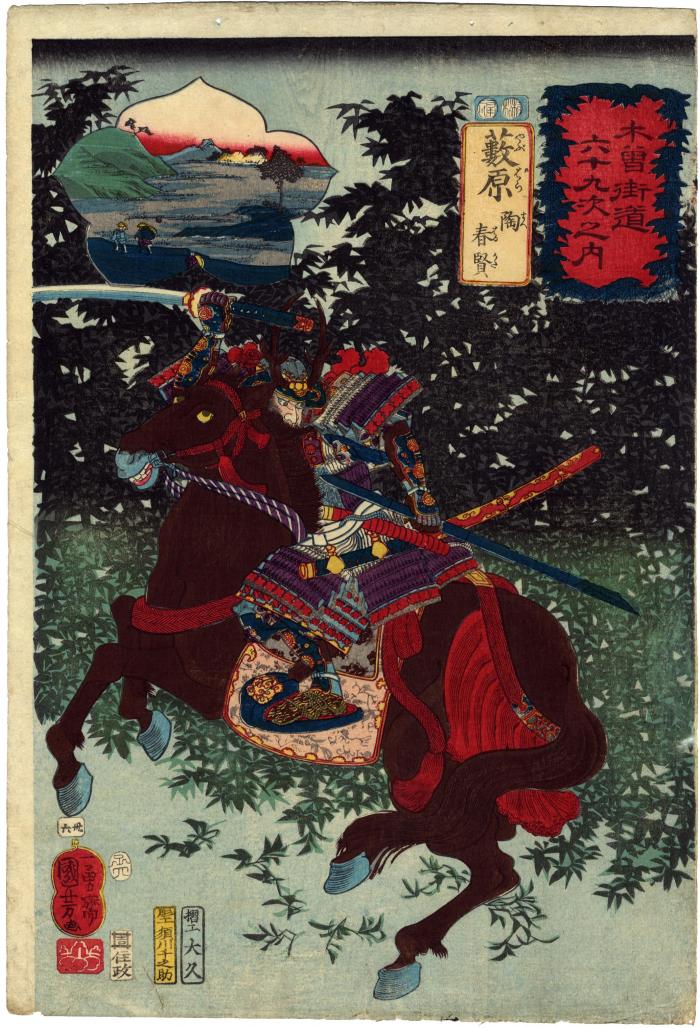 "A mounted samurai brandishes his sword with his right hand, while holding in his left hand a bamboo spear that he has apparently either just cut from the bamboo grove behind him, or perhaps snatched from the hands of an attacker. The place-name Yabuhara means literally 'thicket plain,' suggesting the bamboo thicket, and bamboo makes up the series title border.

According to the subtitle, the warrior is Sue Harukata, a powerful lord in western Japan during the troubled times of the sixteenth century. In 1551 Harukata attacked his own overlord. Ōuchi Yoshitaka (who committed suicide), and gained brief control of the Suō domain until he himself was overthrown in turn. However, no major events in Sue Harukata's life took place in a bamboo grove.

The real subject of the print is Akechi Mitsuhide, who in 1582 overthrew his lord, Oda Nobunaga, and became the de facto ruler of Japan for three days before he was defeated by Toyotomi Hideyoshi, Nobunaga's successor. The name of Sue Harukata, whose story parallels that of Mitsuhide in its basic outlines, was substituted because, under the censorship regulations of the Edo period, it was forbidden to mention any high-ranking person who had lived after 1573. An important clue is the shape of the inset landscape: a bellflower (kikyō), the personal crest of Akechi Mitsuhide. The scene depicted is Mitsuhide's last battle. On the run after his defeat by Hideyoshi, the three-day ruler of Japan was attacked at the village of Ogurusu by a group of peasants who killed him with their homemade bamboo spears.

Kuniyoshi left an even more blatant clue to the correct identification of this print on the title page published several months later, in which the subject listed under Yabuhara is not 'Sue Harukata' but rather 'Ogurusu.' "