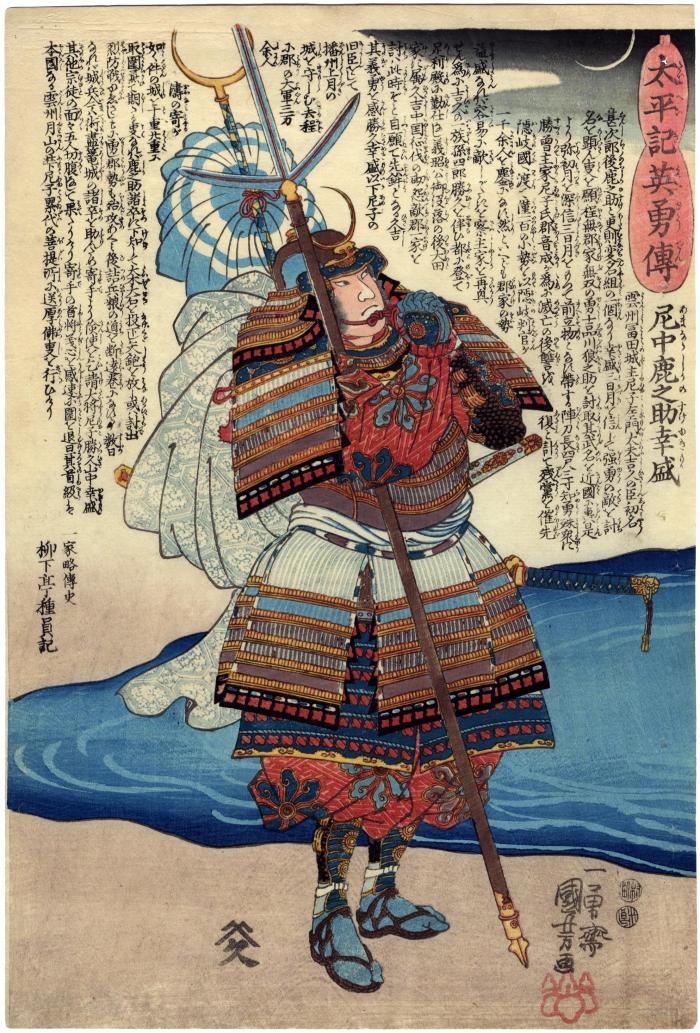 On page 96 Varshavskaya gives a translation of the text on this print:

[Aminaka Shikanosuke Yukimori] was a vassal of Amako Saemonnotayū Yoshihisa, the lord of the castle Tomita in Izumo province. At first [Amanaka's] name was Jinjirō, later he changed it to Shikanosuke and became known under this assumed appellation. Yukimori believed in the three-day moon. He begged that his name bespoke his victory over a strong and brave enemy. Soon afterwards he killed Shinagawa Ōkanminosuke, a matchless hero of the Kōri house, and [Shikinosuke's] military fame reverberated around the neighbouring provinces. Since then his belief in the young moon became even deeper. His helmet's front plate (maedate) was shaped as the three-day moon. The sword he carried at his belt was four shaku and three sun long. In wisdom and bravery he surpassed all. Once after his master's house - the Amako family - was destroyed by Kōri Otonari, he decided to take revenge upon the enemy. He gathered the remnants of the defeated party, crossed to the province of Oki and with but a hundred warriors under his command massacred more than a thousand men of Oki's judge. However, Kōri's forces continued to grow and were not an easy enemy to deal with. In order to restore his lord's house, [Shikanosuke] together with Magojirō Katsuhisa, Yoshihisa's relative, went up to the capital and joined the service of Lord Ashikaga. After the downfall of Lord Yoshiaki, Hisayoshi... who served the house of Ōta..., was subduing Chūgoku... and fought against the Kōri clan, the sworn enemy. At that time [Shikanosuke] said to [Hisayoshi]: 'I beg to personally lead the advance guard [in this struggle].' Hisayoshi was moved by his loyalty and courage and let Katsuhisa, Yukimori and other former Amako vassals defend Kōzuki castle in Harima province. Meanwhile Kōri's large army amounting to thiry thousand men was approaching like heavy waves, surrounding the castle in ten and twenty circles. Shikanosuke, at a previously decided time, ordered some of this soldiers to down big trees and stones, cast arrows and hooks, and commanded others to open fire. The defence was so violent that Kōri's army, brave as it was, seemed well-nigh disheartened in conducting the attack. [But] the reserved body of [Kōri's] troops surrounded the castle at a distance cutting off the way for delivery of army provisions, and in a few days the castle garrison was at the end of their resources. In order to help the soldiers in the besieged castle, a messenger from the enemy side arrived at their request. The generals Amako Katsuhisa, Yamanaka Yukiori and other principal vassals, all five of them, committed seppuku and died. The enemy commander-in-chief admired [Yukimori's] chivalrous spirit. The siege was promptly lifted and, moreover, [Amanaka's] head was delivered to his country in Izumo province, to the place of Amako [family] repose at the foot of Mt. Gassan. There they cordially performed for him the Buddhist memorial service.

In the endnotes on page 169 (19.1) Varshavskaya gives more biographical material about Yamanaka Shikanosuke:

"He served the feudal house fo Amako... from the province of Izumo and became famous for his participation in the struggle, though unsuccessful, led by the members of the Amako clan against their former vassals - feudal lords of the Mōri family... Since 1568, Yamanaka Shikanosuke tirelessly took steps towards restoration of the former fame of his lord's house. In 1578, he volunteered to take part in the military campaign led by Hideyoshi on Nobunaga's orders for subjugation of Chūgoku region, largely in the possession of the Mōri family. At the early stage of the operation while the fighting was going on in the province of Harima, Yamanaka stood in charge of the defence of Kōzuki castle already taken by Hideyoshi and then again attacked by the Mōri troops. In spite of the desperate resistance of the besieged garrison, the castle fell. Yamanaka was captured and on the way to Aki where he was escorted by members of the Mōri clan at the crossing of Ai in Bingo province he was assassinated. His tomb is situated in the city of Takahashi in Okayama prefecture."

In endnote 19.2 it says: "The name 'Amako', meaning 'a nun's child', for the first time was used as a family name Amako Takahisa in the 14th century. Having been left without parents at the age of three, he was raised by a nun. Amako Yoshihisa was actively fighting against representatives of the Mōri clan, the former vassals of his family."

3) in color in Catalogue of Japanese Art in the Náprstek Museum published by The International Research Center for Japanese Studies: Nichibunken Japanese Studies Series 4, 1994, p. 94.

Yamanaka Shikanosuke was a senior retainer of the Amako daimyō. He was born on the 15th day of the 8th month of 1545. Shika means 'deer'. There was a famous one-on-one battle between Shikanosuke and Shinagawa Daisen, who changed his name to Taraki Okaminosuke, which was meant as an insult to his opponent. Okami means 'wolf' and wolves kill deer. The battle took place on an island in the Toda River. There were many onlookers. It was an epic conflict but Shikanosuke won and cut off Okaminosuke's head and held it up shouting "The deer has killed the wolf!"

It should also be noted that at Waseda University they give this title as 太平記英勇伝 which is only different in the last kanji character.
warrior prints (musha-e - 武者絵) (genre)
Yamamotoya Heikichi (山本屋平吉) (publisher)
Taiheiki (太平記) (genre)