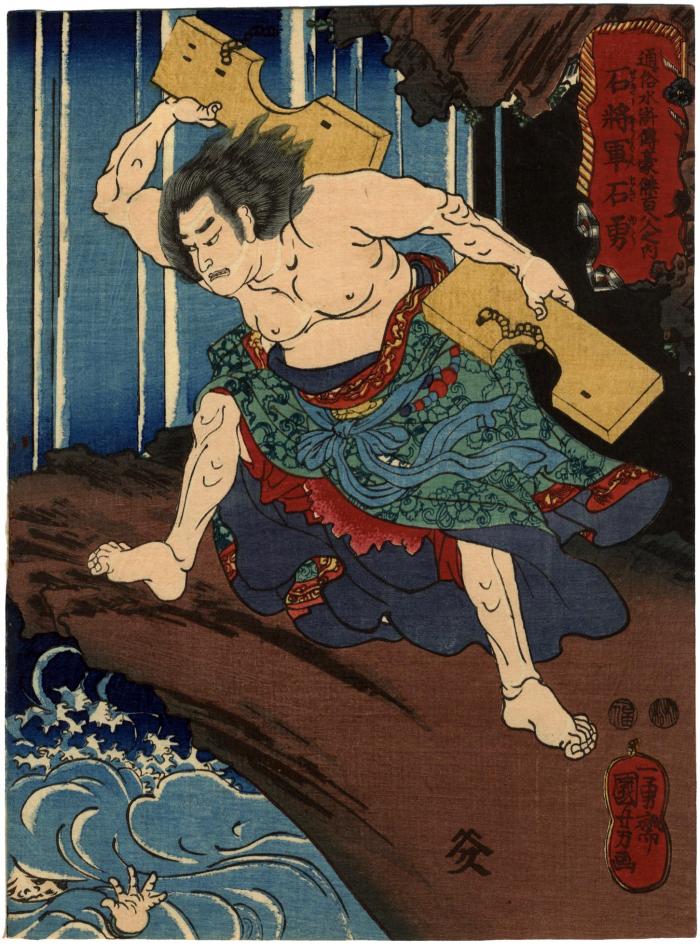 We first encounter Shi Yong in Chapter 35 on pages 550-51 of Outlaws of the Marsh when he a false message to Song Jiang that his father has died:

"Listen brother. My name is Shi Yong, I'm from the prefecture of Daming. I used to run a gambling house there. Local people nicknamed me General Shi. I got into a quarrel with a fellow while gambling and killed him with one blow of my fist. I ran away and took refuge with Lord Chai. Many of the gallant fraternity there spoke of you, brother, so I went to Yungcheng to join you, but you were away. I met your younger brother, and when he heard I came from Lord Chai's manor, he said you were at Squire Kong's, on White Tiger Mountain. I told him I would go to you there, and he wrote a letter and asked me to deliver it to you. 'When you find my brother,' he said, 'tell him to come home at once.' "

Worried, Song Jiang asked: "How many days did you stay at our manor? Did you see my father?

"I just spent one night, then left. I didn't see the old gentleman."

Song Jiang told him of their plan to go to Liangshan Marsh. Shi Yong said: "After I left Lord Chai's I heard of you often from men of the gallant fraternity, how generous and upright you are, how you help those in difficulty and danger. If you are joining the band on Mount Liangshan you must take me with you."

"That goes without saying. What's one man more? Come and meet Yan Shan."

Song Jiang told the waiter to pour. After the three had drunk, Shi Yong got the letter from his bundle and handed it to Song Jiang. The clerk looked at it. The envelope was sealed the opposite of normal, and it was not inscribed with the usual "All's well". Song Jiang's anxiety increased. He tore open the envelope and read the letter. It concluded with:

...Early in the first lunar month father died of illness. He is still lying in his coffin at home. We are waiting for you to return so that we can bury him. Please return immediately, do not delay!
In sorrow, your younger brother, Qing

Song Jiang cried out in anguish and beat his chest."Unfilial son that I am! How badly I've behaved! He is dead and I am not there to perform my duties as a son! I'm no better than a beast!" He beat his head against the wall and lamented. Yan Shun and Shi Yong put their arms around him, and he wept till he was dazed. It was some time before he recovered.

Sekishōgun Sekiyū (Shi Yong in the Chinese version) was a rambunctious member of the outlaw gang. Here he is shown breaking out of his stocks and throwing them into the waterfall nearby. He is probably aiming for the fellow who is struggling in the water below - most likely his jailer.

There is another print by Kuniyoshi of Sekishōgun Sekiyū in a dramatic fight scene (Klompmakers, Of Brigands and Bravery, #61, p. 183). We have added a link to an example at the British Museum for your viewing.
Yamamotoya Heikichi (山本屋平吉) (publisher)
Suikoden (水滸傳) (genre)
warrior prints (musha-e - 武者絵) (genre)