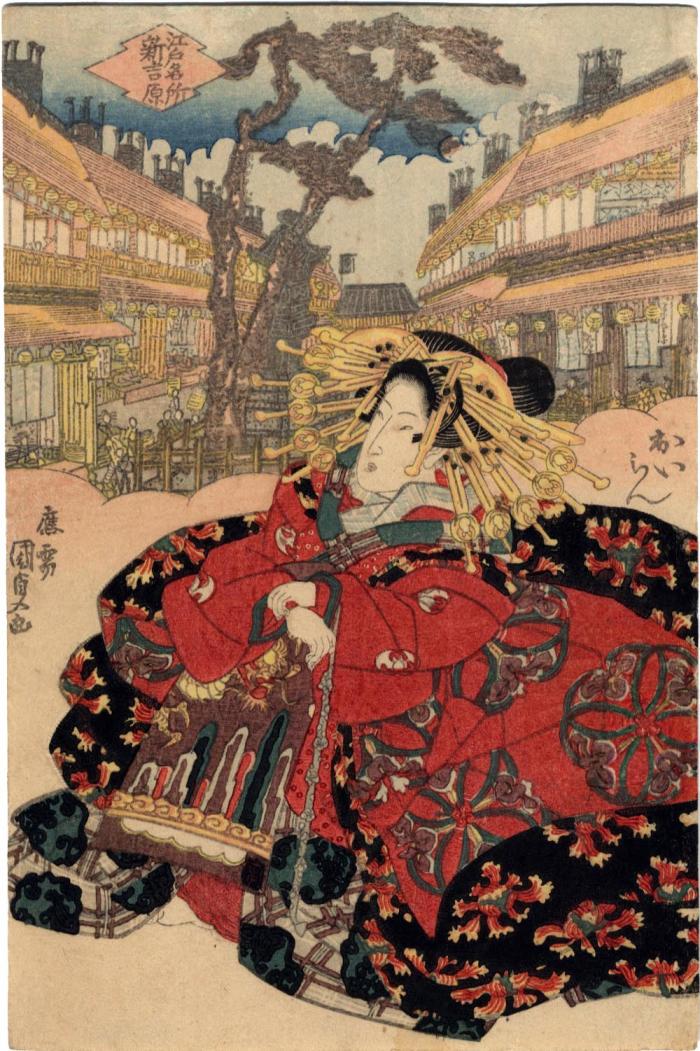 Google maps - Yoshiwara Shrine - one of the only signs of where this famous district was
Museum of Oriental Art, Venice (via Ritsumeikan University)
Nationaal Museum van Wereldculturen (Rijksmuseum Volkenkunde, Leiden)

The title cartouche is placed within a matsukawa-bishi (松皮菱) or pine bark, i.e., triple lozenge, motif. Kunisada used it elsewhere, but only rarely, to enclose his toshidama symbol which often accompanied his signature.

Sebastian Izzard, speaking of this series in his Kunisada's World (p. 92), says: "This elaborately engraved and printed series features eight women from the various districts of Edo, each separated from the landscape background by waist-high stylized clouds, a device Kunisada used often. The images were probably printed from a larger block, four to a sheet, and later divided. This explains the lack of seals and publisher's marks on all but two of the designs. There may also be a missing sheet of four images, making a set of beauties of the twelve months, a common theme. The women wear the latest fashions and come from all walks of life. The backgrounds, which depict the areas where they live and work, include Western-style perspective, cumulus clouds, and volumetric modeling through shading. The series also features a blue known in Japan as bero-ai (Berlin blue), a synthetic pigment newly imported by the Dutch. At first it was used only sparingly, probably because it was scarce and therefore expensive."

Later Izzard wrote about this print on page 94: "A courtesan of the Yoshiwara crouches down in her finery... she is taking a short smoking break. Her red brocade robe is richly ornamented with roundels of irises and there is a bat crest on the shoulders and sleeves; the hem and lining are decorated with peonies on a black ground. Her obi is tied in front and has a pattern of dragons flying over stylized mountains and clouds. Weighing down her head is an astonishing coiffure that features no less than twenty-one enormous tortoiseshell hairpins and combs; it is a display of conspicuous consumption designed to amaze and awe her clients. As was customary in the profession, her feet are bare.

In the background is the Nakanochō, the main street of the Yoshiwara, lined with two-story teahouses gaily decorated with paper lanterns. The roof of the Great Gate (Ōmon) is visible at the far end. Kunisada seems quite secure here in his mastery of Western one-point perspective."

The publisher is believed to be Mikawaya, aka Shimizu.

One of the other images not shown in the Lyon Collection is in the Rijksmuseum voor Volkenkunde, Leiden.

There is another curious motif that isn't mentioned above. Toward the ends of her hairpins or kanzashi are carved images of seated rabbits seen from the back silhouetted against a full moon. The rabbit/moon is an ancient East Asian symbol. Combined with the dragon on the woman's obi there are two Zodiac signs. Is there a reason for this or is it only a coincidence, a convergence of visual motifs? It should also be noted that the decorations on courtesans hairpins may well identify which house they belonged to. This would be an interesting subject for research for young scholars today.

John Fiorillo and Peter Ujlaki noted in an article on Shigeharu in Andon that when courtesans wore clothing decorated with a dragon that it was an indication of their high rank.

There is also another copy of this print in the Rijksmuseum voor Volkenkunde, Leiden.