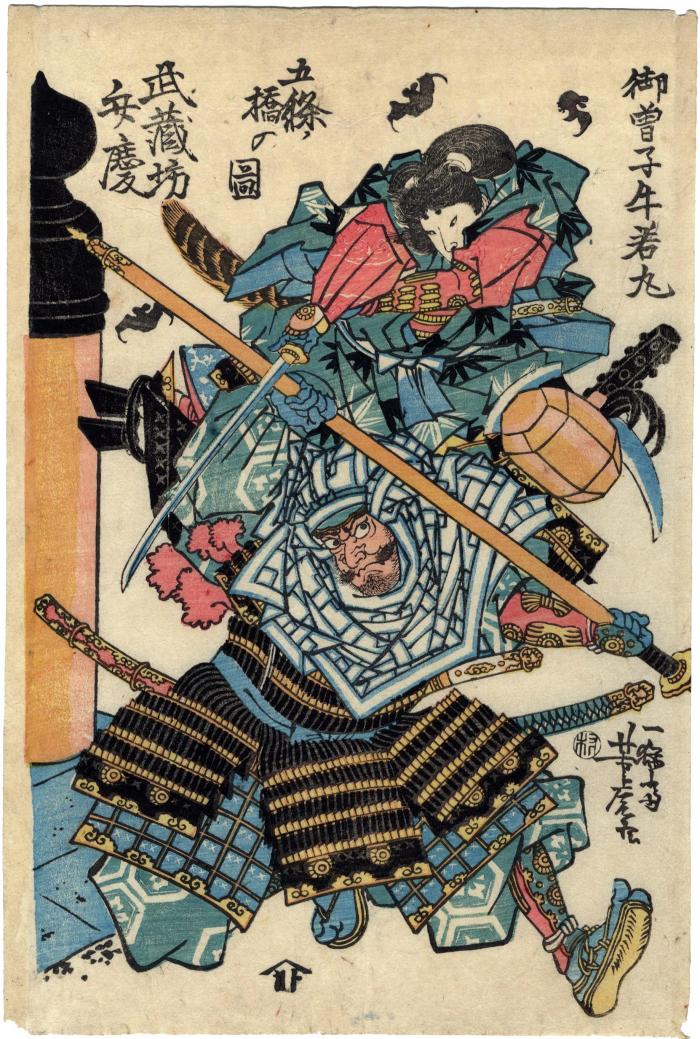 This image of the first encounter between the youthful Ushiwakamaru and the warrior-monk Benkei at Gojō Bridge has been repeated over and over by many famous artists. Benkei, whose figure looks like it should be completely encumbered by the number of weapons he is carrying, is in search of that one last sword which will make his arsenal complete. He decides to take it from Ushiwakamaru who looks like a vulnerable young man, easy prey. However, what Benkei doesn't know is that Ushiwakamaru, the youthful name of the great Japanese hero Minamoto Yoshitsune, was taught to fight by the tengu, mystical-mythical bird-like creatures with extraordinary powers. Those skills allow Ushiwakamaru to make astounding leaps in the air much like those seen in modern martial arts movies from the Far East.

Keenly aware that he had finally met his match, Benkei becomes a devoted follower of this remarkable young man.

There are at least four other compositions in the Lyon Collection of this memorable encounter. The earliest is by Shunzan (#390) from earlier in the 19th century. One beautiful diptych is by Kunisada (#635). Another diptych is by Yoshifuji (#1308). But the most remarkable example, in its own way, is a print by Kuniyoshi (#614), Yoshitora's teacher. It shows the two combatants in almost exactly the same poses and should be compared to one another as a lesson in connoisseurship. The Kuniyoshi print predates that of the Yoshitora by approximately ten years and clearly was its model.

There are other elements to the design of this print which need pointing out. Yoshitora has given us just enough visual information for a proper reading of this motif. Ushiwakamaru is there, Benkei is there, and the Gojō Bridge is understood by the partial, but prominent view on the left-hand side of the giboshi or symbolic newel post and the blue flagstones. But what is more astounding is the sparseness of this design and what isn't there: there is no moon visible, no night sky, no water, no distant landscape. All of these are left for us to fill in with our own imaginations.

One last element is worth noting, the bats. We have looked at a number of scholarly studies and have seen no mention or explanation for their inclusion in this image. On the other hand, Kuniyoshi's print as a model for this one, previously mentioned, also has bats. Is it just an artistic touch? Or, are the bats meant to be a veiled reference to the tengu who earlier taught Ushiwakamaru his craft? We don't know, but we do know that a cursory search of this motif appears to show no known use of bats in this scene prior to their inclusion by Kuniyoshi in the 1830s. Either way, they make for a wonderful addition to this imagery.
warrior prints (musha-e - 武者絵) (genre)
Yahataya Sakujirō (八幡屋作次郎) (publisher)
Musashibō Benkei (武蔵坊弁慶) (role)
Minamoto no Yoshitsune (源義経) (role)
tengu (天狗) (genre)
bats (komori - 蝙蝠) (genre)