Despite there being many dramatizations in bunraku and kabuki of the 1737 jealousy-inspired murder of five people in Sonezaki, Osaka, on which this play is based, the first one was not written until 1777. After it was presented in Kyoto, its author moved to Edo, and the play was done there in early 1795, with the geisha Kikuno's name changed to Koman and the action shifted to Edo's Fukagawa district. Two traditions for the play persisted, one for Kamigata and one for Edo.

Satsuma Gengobei, of the Chishima clan in Kyūshū, comes to Edo with his fellow samurai retainer, Sasano Sangobei, to seek out the lost family heirloom of a flute (a sword in Kamigata) called Ryūko (“Dragon and Tiger”). Their young lord, Sentarō, is a foolish libertine who frequents the Fukagawa pleasure quarters. Both serve as his companions, but Sangobei falls for the geisha Koman of the Sakuraya. She, for her part, despises him and, thinking it might be a deterrent, asks Gengobei to pretend to be her boyfriend. He agrees to do it, but the result is that Sangobei uses his evil wiles to incite Sentarō against Gengobei, who is kicked out of the clan and becomes a rōnin.

Koman and Gengobei actually fall in love with each other and plan for their future; she writes the characters for “Go-dai-riki” (“Five Great Powers”) on her shamisen, this being a reference to the five bodhisattvas of Osaka's Sumiyoshi Inner Shrine, used as a seal on love letters, promising her sweetheart eternal love. Since Gengobei has become aware that Sangobei himself stole the precious flute, he asks Koman to play up to Sangobei to sound him out. She agrees reluctantly. Sangobei takes advantage of her and, with five strokes, alters the characters written on the shamisen to say “Sangobei taisetsu” (“beloved Sangobei”), which riles Gengobei. Sangobei uses the young low-ranking samurai Hachiemon to trick Koman into announcing her separation (enkiri) from Gengobei and to revile him publicly "(aisozukashi). He gradually grows skeptical and kills Koman, followed by four others. Later, learning that Koman acted only out of love for him, Gengobei slays Sangobei and regains possession of the flute." 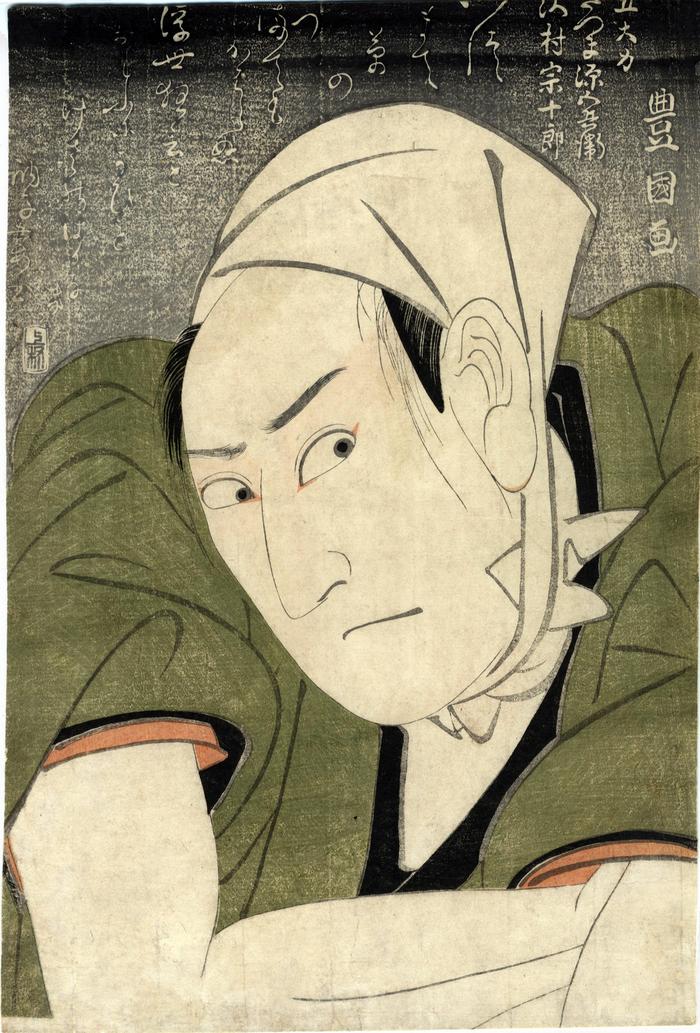