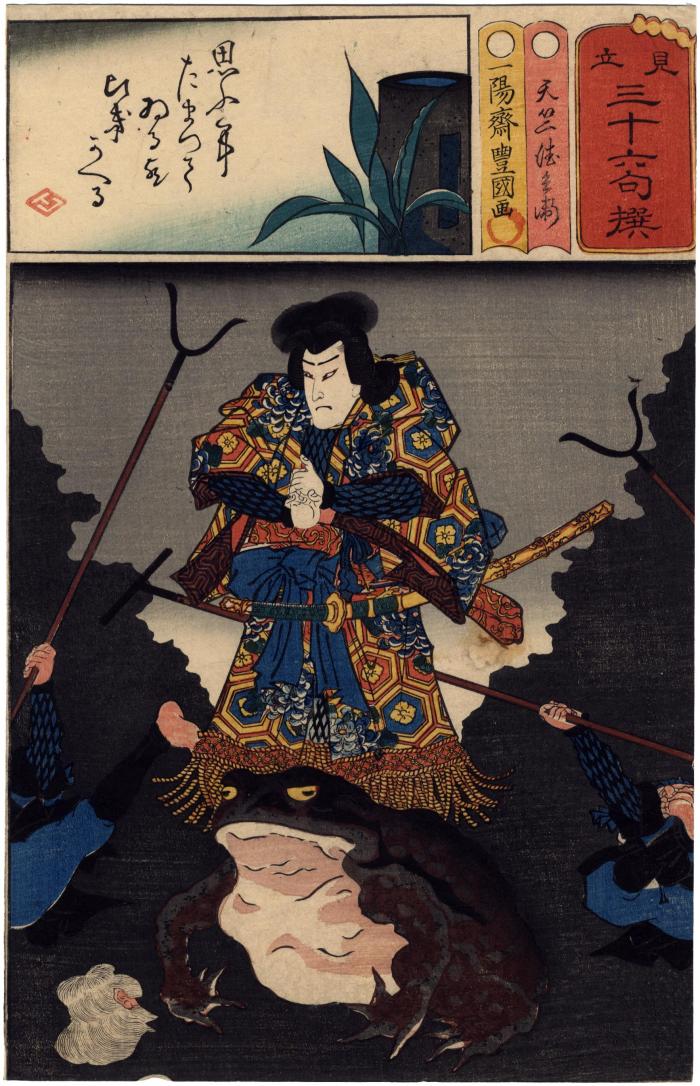 Tenjiku Tokubei means Tokubei from India. A major play about him, Tenjiku Tokubei Ikoku-Banashi debuted in 1804. Earlier plays were based on the account of an Edo adventurer Takamatsu Tokubei who traveled to India and returned to Japan on a Dutch ship in 1633. "For decades, these plays had been performed in summer as so-called water plays (mizu kyōgen), which used real water to distract audiences from the heat. Nanboku also used water and added numerous spectacular tricks (keren) to emphasize his transformation of the tale into a, at times, chilling ghost play (kaiden mono), in tune with the summer Obon (bon) festival in which the spirits of the dead were briefly welcomed home by their families.

The success of the 1804 production of Tokubei from India not only resulted in a series of revivals but also ushered in a whole slew of ghost plays. Previously ghosts had appeared in kabuki to express the yearning of a departed soul. Nanboku — inspired by the new taste of theatregoers for the bloodthirsty and bizarre, an effect of the Bunka-Bunsei (Kasei) era's (1804-1830) social decadence — wrote a series of ghost plays that aimed to terrify audiences….

The play is renowned for its spectacular tricks and unusual costumes, which represent magic and foreign influences on Japan. The play is also unusual for the multiple and rapid scene changes that contribute to the sense of supernatural uncertainty.”

Tokubei doesn’t realize it but he is the son of a Korean warrior who is hell-bent on killing the shogun. His father is in the possession of several powerful tools which help him perform magical feats. Before killing himself the father hands off these magical tools to Tokubei. The spectacles that follow in this play are astounding.

“The play is remarkable not only for preposterous magic and visually brilliant special effects, but also for the dramatic concept of supernatural chaos…”

The publisher is probably Iseya Kanekichi.

"In 1856, two years after the American Commodore Perry had forced Japan to open its harbours to foreign countries, the 71-year-old print artist Kunisada (1786-7864) had a meeting with three publishers to discuss the production of a new series of woodblock prints. They must have had a premonition that Japan was entering a new era, but continued business as usual and decided to issue another traditional series of woodblock prints, titled Comparisons to a selection of thirty-six verses (Mitate sanjurokkusen). Each print would show a poem in combination with a scene from the Kabuki stage. The term mitate (comparison, parody, allusion) in the title suggests the prints of the series also challenged buyers to find connections between the poems and the Kabuki scenes. Most likely the series aimed at Kabuki devotees and those interested in poetry. By the mid-19th century literacy among Japan's townspeople was very high. Books were widely available and membership of poetry clubs enjoyed unprecedented popularity. Anthologies with hundreds of amateur verses, often with humorous or parodic varieties of classical Japanese poems, were published in ever greater numbers."