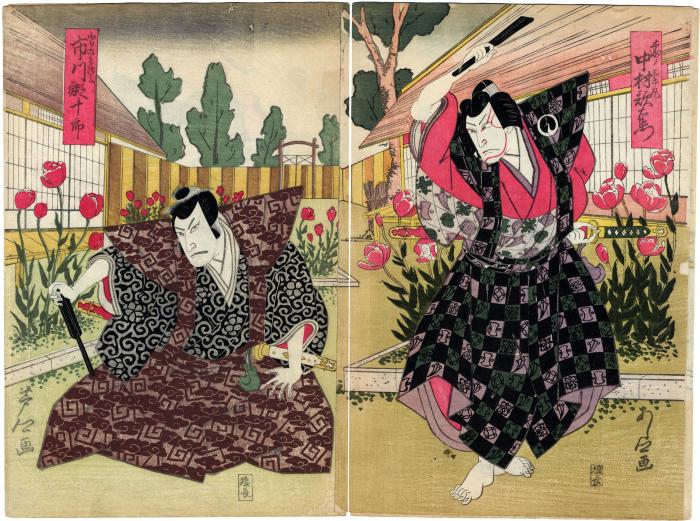 05/1816
20 in x 15.25 in (Overall dimensions) Japanese woodblock print
Signed: Ashisato ga (あし郷画)
Publisher: Shioya Chōbei (seal not in Marks)
Waseda University - right panel
Waseda University - left panel
Lyon Collection - Kuniyoshi print related to Mori Ranmaru
Lyon Collection - related Kunihiro print
Ishikawa Prefectural Museum of Art This scene is from the play Gion Sairei Shinkōki (祇園祭礼信仰記 - 'The Gion Festival Chronicle of Faith') performed at the Kadoza in 5/1816. The crane with its wings opens into a circle on the left 'lapel' of Utaemon III is the crest of Mori no Ranmaru.

"Ranmaru was the son of Mori Yoshinari and came from the Mino region northeast of Nagoya; he became a vassal of Nobunaga from an early age and was in residence wtih him at Honnō Temple when Akechi Mitsuhide (1528?-82) launched a fierce assault against them. Even though they fought bravely Ranmaru and his younger brothers died defending Nobunaga." [Ranmaru's younger brothers were Mori Rikimaru Nagauji (1567-82) and Mori Bōmaru (1566-1582). This information was supplied by Varshavskaya.]

"Mori Ranmaru was one of Oda Nobunaga's favourite and closest vassals. Oda appreciated his talents and appointed him to a high administrative position of bugyō."

"In the Warring States period, the samurai came to have acolytes of their own; it is said, for instance, that the famous warrior Oda Nobunaga (1534-1582) had an acolyte called Mori Ranmaru who was the object of his homoerotic affections."

Quoted from: "Buddhism and the Historical Construction of Sexuality in Japan" by Minamoto Junko and Hank Glassman, U.S.-Japan Women's Journal. English Supplement, No. 5 (1993), p. 109.

Some historical background for Yamaguchi Kurōjirō

"Lord Oda Kazusa no Suke. Nobunaga was in his nineteenth year, advanced via the village of Nakane to Konarumi with some eight hundred men and deployed his troops on a hill called San no Yama. As he did so, his enemy Yamaguchi Kurōjirō, in his twentieth year, hurried with about fifteen hundred men toward Akazuka, which was situated fifteen chō [1,635 meters] to the east of San no Yama and about fifteen or sixteen chō to the north of Narumi. Kurōjirō’s vanguard consisted of light infantry led by... [several of his lieutenants].

Observing the enemy’s maneuvers from San no Yama, Kazusa no Suke Nobunaga ordered his own troops to Akazuka. His vanguard was the light infantry of Arakawa Yojūrō, [et al.] When the two forces had come within five or six ken of each other, expert archers on both sides let loose a hail of arrows. Arakawa Yojūrō was hit full in the head, just beneath the front rim of his helmet, and fell off his horse. Enemy soldiers jumped upon his body to drag it to their side, some pulling it by the shins and others by the gold-encrusted hilt of Yojūrō’s sword. Ours held on to his head and torso. The sword that he had carried into this battle, people later said, was one ken [1.8 meters] long and five to six sun [fifteen to eighteen centimeters] wide. Our side first managed to get hold of the sheath and later retrieved Yojūrō’s sword, his body, and his head as well. The battle raged from the Hour of the Serpent [around 10 a.m.] to the Hour of the Horse [around noon]. The men would strike blows at each other, draw back, and then return to strike blows at each other again, unwilling to fall behind their comrades or be outdone by them. The enemies killed in the thick of battle... [were several]. The battle was fought at such close quarters that neither side took any heads. Lord Kazusa no Suke Nobunaga’s casualties amounted to thirty men-at-arms killed in action. Arakawa Matazō was taken prisoner by our side, and Akagawa Heishichi was taken prisoner by the enemy. The men would storm into the mêlée, making sparks fly, and then pull back, adopting a defensive posture with one knee bent to the ground at a distance of four or five ken from the enemy. In those days people spoke of having the upper or the lower spear in battle. After hours of intense fighting, Kurōjirō had the upper spear. The combatants all knew each other, so neither side let down its guard. They fought dismounted, and their horses ran freely into the opposing camp. The horses were later returned without a scratch, and the prisoners of war were exchanged as well. Nobunaga terminated this operation that same day."